➤CONCERNS RAISED AFTER CDC TELLS STATES TO READY FOR CORONAVIRUS VACCINE BY NOVEMBER 1ST: The Centers for Disease Control and Prevention sent a letter to state governors last week telling them to be ready to distribute a coronavirus vaccine by November 1st, raising concerns among public health experts about a vaccine being approved because of political considerations ahead of the election two days later.

The letter from CDC Director Robert Redfield urges states to expedite applications for distribution facilities, including waiving requirements that would prevent them from being ready by November 1st. The CDC also sent planning documents to some health departments that urge taking steps to prepare, such as figuring out which groups would get vaccines first and who would administer the shots.

The documents also included possible timelines, one of which said limited doses could be available by early November. The final and most important stage of vaccine testing in human trials is still only about halfway through at best for the two vaccine candidates that began Phase 3, and AP cited several experts as saying it doesn't seem possible there'd be enough data from this final stage by November 1st about whether they're safe and effective. Food and Drug Administration Commissioner Stephen Hahn told the Financial Times earlier this week that he's open to issuing emergency use authorization for a vaccine before human trials end if, quote, "the benefit outweighs the risk."

Studies Confirm Steroids Help Severely Ill Patients Survive: An analysis out yesterday of the results of seven studies confirmed that several types of steroids improve survival in severely ill COVID-19 patients. It found that steroids reduced the risk of death in the first month by about one-third compared to placebos or usual care alone in these patients. A study in June had found that a steroid called dexamethasone cut deaths by up to 35 percent in severely ill patients, and the new analysis found that all types of steroids are effective as well. Indications are, however, that steroids don't seem to be effective in less sick patients.

There have been more than 185,700 deaths in the U.S. as of early this morning, according to Johns Hopkins University's count, and more 6,113,000 confirmed cases.

➤BIDEN GOING TO KENOSHA TODAY: Democratic presidential nominee Joe Biden is going to Kenosha, Wisconsin, today, two days after President Trump traveled there in the wake of protests and violence in the city following the police shooting of Jacob Blake, a 29-year-old Black man who was left paralyzed after being shot in the back seven times. The former vice president plans to meet with Blake's family and to have a community discussion that he said would include business figures, civic leaders and law enforcement officials. He told reporters, "This is about making sure that we move forward." Trump met with and praised law enforcement officials and toured buildings damaged when some protests turned violent when he went to Kenosha, but did not meet with Blake's family.

➤TRUMP APPEARS TO ENCOURAGE PEOPLE TO VOTE TWICE: President Trump appeared during a visit to North Carolina yesterday to encourage people in the state to vote twice, once by mail and then in person, in November. It is illegal to vote twice. It seemed Trump was saying North Carolinians should try to vote twice to test the system and check that their absentee vote was counted. When asked by a reporter if he was confident in the state's absentee voting system, Trump said, "Well, they'll go out and they'll go vote, and they're going to have to go and check their vote by going to the poll and voting that way, because if it tabulates, then they won't be able to do that. So, let them send it in, and let them go vote, and if the system is as good as they say it is, then obviously they won't be able to vote." Trump later again appeared to encourage it, saying, "The absentees are fine. . . . And you send them in, but you go to vote. And if they haven't counted it, you can vote." But North Carolina officials are urging voters not to do that. Patrick Gannon of the North Carolina State Board of Elections told CNN, "[P]eople do not need to go to the polls on Election Day if their ballot had been counted. In fact, we'd strongly advise against that, to allow other people who haven't yet cast a ballot to vote."


Black man dies after police cover his head with hood and press his face into the ground while he is naked and handcuffed https://t.co/zhLco2wuCg
— CBS News (@CBSNews) September 3, 2020

➤VIDEO SHOWS ROCHESTER, N.Y., POLICE PUT HOOD ON BLACK MAN WHO SUFFOCATED: Police bodycam video released Wednesday by the family of a 41-year-old Black man who died of suffocation shows that Rochester, New York, police put a hood over his head while he was handcuffed and pressed his face to the pavement for two minutes. Daniel Prude died on March 30th, seven days after the incident, when he was taken off life support. A medical examiner ruled his death a homicide caused by "complications of asphyxia in the setting of physical restraint." The city stopped its investigation when the New York attorney general began its own probe in April, which is still ongoing. Activists want the officers charged with murder. Prude's brother said during a news conference yesterday, "I placed a phone call for my brother to get help. Not for my brother to get lynched. How did you see him and not directly say, 'The man is defenseless, buck naked on the ground.'"

Prude, who was in Rochester visiting his brother, had been taken into custody by police about eight hours earlier for a mental health evaluation for suicidal thoughts. But he was only there for a few hours, and his brother, Joe Prude, call 911 early in the morning to report Daniel had left the house. Prude was found running naked in the street, and the videos show him complying when police ask him to get on the ground and put his hands behind his back. But he is agitated and shouting and police put a "spit hood" over his head -- with one officer having since said he was spitting and they were concerned about the coronavirus. Then they slam his head down and one officer holds his head down against the street with both hands as he says to calm down and stop spitting. Another officer puts his knee on Prude's back. Prude is heard shouting, "Trying to kill me!" and begs, "OK, stop. I need it. I need it." He then begins whimpering and grunting, and the officers appear to get concerned after he stops moving and talking and they see water coming out of his mouth. They then take off the hood and handcuffs and medics perform CPR.

The commission chooses the moderators without input from the candidates, Trump's campaign complained about the selections, with campaign communications director Tim Murtaugh declaring, "Some can be identified as clear opponents of President Trump, meaning Joe Biden will actually have a teammate on stage most of the time . . . 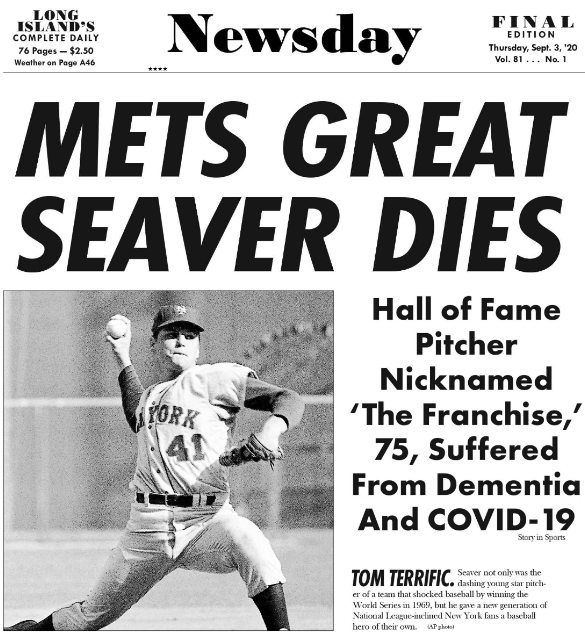 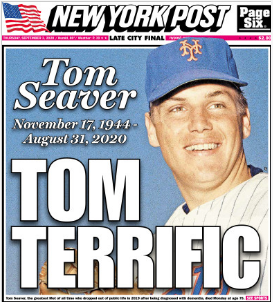 ➤HALL OF FAME PITCHER TOM SEAVER DEAD AT 75: Hall of Fame pitcher Tom Seaver, who led the 1969 "Miracle Mets" to a World Series championship, died Monday from complications of Lewy body dementia and the coronavirus, the Hall announced last night (September 2nd). He was 75.

Seaver's family announced in March 2019 that he'd been diagnosed with dementia and had retired from public life. Among Seaver's achievements, he was a three-time National League Cy Young Award winner, the 1967 NL Rookie of the Year, and a five-time 20-game winner. He had a 2.86 ERA and 3,640 strikeouts over his career from 1967 to 1986, spending 1967 to 1977 with the Mets before being traded to the Cincinnati Reds. He also played for the Chicago White Sox and Boston Red Sox. Seaver was elected to the Hall of Fame in 1992 with a then-record 98.84 percent of the ballots.

Mets owner Fred Wilpon and team operating officer Jeff Wilpon said yesterday, "He was simply the greatest Mets player of all-time and among the best to ever play the game."

➤TOP-SEED PLISKOVA OUT IN SECOND ROUND AT U.S. OPEN: Top-seeded Karolina Pliskova lost in the second round at the U.S. Open on Wednesday (September 2nd), falling to 50th-ranked Caroline Garcia 6-1, 7-6 (2). Eleventh-seeded Elena Rybakina, 12th-seeded Marketa Vondrousova and 13th-seeded Alison Riske were all also upset yesterday, while two-time Grand Slam champion Naomi Osaka won her match. The top seed among the men, Novak Djokovic, advanced, as did Number 4 Stefanos Tsitsipas and Number 5 Alexander Zverev.


➤RAYS' BROSSEAU HITS TWO HOME RUNS AGAINST YANKEES DAY AFTER BALL THROWN OVER HEAD: The Tampa Bay Rays' Mike Brosseau hit two home runs in Tampa's 5-2 win over the New York Yankees last night (September 2nd), getting some payback the day after Aroldis Chapman threw a fastball over his head. Chapman was suspended three games by MLB yesterday for the throw, and is appealing. There was no retaliation by the Rays even though manager Kevin Cash seemed to threaten the Yankees after the game the night before, saying, "And the last thing I’ll say on this is I got a whole damn stable full of guys that throw 98 miles per hour.

➤RUNNING BACK FOURNETTE JOINING BUCCANEERS: Running back Leonard Fournette is joining the Tampa Bay Buccaneers with a one-year deal worth up to $3.5 million, according to NFL Networks. Fournette confirmed the news on Twitter yesterday (September 2nd), two days after he was waived by the Jacksonville Jaguars. Fournette, who was chosen as the Number 4 overall pick in the 2017 NFL draft by the Jaguars, went unclaimed on waivers Tuesday, with no team choosing to pick him up on the one-year, $4.167 million deal he had remaining.

➤IOWA STATE CANCEL PLANS FOR 25,000 FANS AT HOME OPENER: Iowa State has canceled plans to have 25,000 fans in the stands for its home football opener on September 12th, reversing itself yesterday (September 2nd) two days after announcing the news despite the coronavirus pandemic. The school said Wednesday that it now won't allow any fans, citing feedback it had gotten from the community. The New York Times recently identified Iowa as a hotspot state for the virus and the city of Ames, where the school's stadium is located, as a hotspot city.
Posted 4:05:00 AM