President Trump traveled to Kenosha, Wisconsin, yesterday the site of protests and violence in the wake of the August 23rd police shooting of Jacob Blake, a 29-year-old Black man, seven times in the back, leaving him paralyzed. There was further violence two days later when a 17-year-old with a semi-automatic rifle, Kyle Rittenhouse, allegedly killed two protesters. Trump on Tuesday toured a block that was destroyed by arson from protests that turned violent, saying, "These are not acts of peaceful protest but, really, domestic terror." The president also met with law enforcement officials and praised police.

Questioned by reporters about the shooting of Blake, Trump said he felt, quote, "terribly" for anyone who suffered a loss, but otherwise called the situation "complicated" and said it was under investigation. He also repeated a statement he'd made in an interview the night before that police sometimes, quote, "choke." Trump the day before had also suggested Rittenhouse, who is facing homicide charges, was acting in self-defense. Blake's family, meanwhile, held what it called a "community celebration" yesterday, with an uncle, Justin Blake, saying in a statement, "We don’t need more pain and division from a president set on advancing his campaign at the expense of our city."

➤REPORT: CORONAVIRUS ANTIBODIES LAST AT LEAST FOUR MONTHS: Antibodies to the coronavirus that people's bodies produce after being infected to fight off the disease last for at least four months and don't fade as quickly as earlier reports suggested, according to a report out Tuesday, which is positive news for vaccine development. The report was based on tests of more than 30,000 people in Iceland, and is the most extensive on the immune system's response to the virus over time. The researchers report that earlier studies suggesting that antibodies fade quickly may have been looking only at the first wave of antibodies the immune system makes. A second wave is produced after a month or two, and those seem to be more stable and long-lasting, according to the scientists.

U.S. Won't Join Global Effort to Find Vaccine: The Trump administration said yesterday that it won't work with an international effort to develop and distribute a coronavirus vaccine because it doesn't want to be constrained by multilateral groups like the World Health Organization. The decision comes after President Trump's July decision to pull the U.S. out of the WHO, claiming it needs reform and is heavily influenced by China. More than 150 countries are setting up the international effort, called the COVID-19 Vaccines Global Access Facility (COVAX). It would allow nations to take advantage of the many potential vaccines globally to ensure whichever ones are effective are quickly available for their citizens. Democratic Rep. Ami Bera, who's a medical doctor, criticized the decision, tweeting, "Joining COVAX is a simple measure to guarantee U.S. access to a vaccine -- no matter who develops it first. This go-it-alone approach leaves America at risk of not getting a vaccine."


There have been more than 184,600 deaths as of early this morning, according to Johns Hopkins University's count, and more than 6,075,000 confirmed cases.

➤GROWING NUMBER OF PEOPLE IN LOUISIANA SEEKING SHELTER AFTER HURRICANE LAURA: A growing number of Louisiana residents are seeking shelter in the wake of Hurricane Laura, which hit the southwestern part of the state as a powerful Category 4 storm last Thursday. Governor John Bel Edwards said Tuesday that more than 11,000 people are being housed by the state, in addition to thousands of others who are staying with friends and family or putting themselves up elsewhere temporarily, and he said the numbers are rising every day. He said, "What's driving people to the shelter is some combination of their home not being safe, habitable and secure, not having power and not having water, and for many people in our shelters, it’s going to be all three." About 12 percent of all customers in Louisiana are still without power, about 180,000 people have no water. Repairs in the hardest-hit areas are expected to take weeks or even months.

Dr. Sean Conley said in a statement that Trump, quote, "has not experienced nor been evaluated for" any strokes, mini-strokes or cardiovascular emergencies.

Trump had earlier in the day blasted claims on social media that he'd had mini-strokes, tweeting: "Now they are trying to say that your favorite President, me, went to Walter Reed Medical Center, having suffered a series of mini-strokes. Never happened to THIS candidate - FAKE NEWS."


Mike Pence was never put on standby, & there were no mini-strokes. This is just more Fake News by @CNN, a phony story. The reason for the visit to Walter Reed, together with the full press pool, was to complete my yearly physical. Short visit, then returned (with press) to W.H... https://t.co/GUVdbJRvqD
— Donald J. Trump (@realDonaldTrump) September 2, 2020


The tweet comes in the wake of New York Times reporter Michael Schmidt's new book saying that before Trump went to Walter Reed, Vice President Mike Pence was alerted, quote, "to be on standby to take over the powers of the presidency temporarily if Trump had to undergo a procedure that would have required him to be anesthetized." Pence said on Fox News yesterday, "I don't recall being told to be on standby. I was informed that the President had a doctor's appointment," and stated, "there was nothing out of the ordinary about that moment or that day."

The report in Schimdt's book raised further speculation about the Walter Reed trip, which the White House said was Trump getting part of his annual physical done early. However, reports said it didn't follow the usual procedures of a routine appointment.

➤TWITTER TWEAKS TRENDING LISTS: Twitter said Tuesday that it's tweaking its trending lists to add more context to topics, but it's not eliminating the feature, which critics and even some of its own employees have called for it to do.

The issue is that Twitter's "Trending Topics" lists often are gamed by bots and trolls to spread false, hateful or misleading information, including about important issues like our elections. Trending Topics will now include explanatory tweets and descriptions that show why an item is trending. Cindy Otis of Alethea Group, which conducts disinformation investigations, explained the reasoning to the New York Times, "So many of the disinformation narratives that we see on Twitter are spread by people who don’t necessarily agree with it -- they are simply talking about it because it’s trending, and therefore they amplify it."

But some critics say the change doesn't go far enough to address the central problem, that those who spread disinformation know how to game the algorithms Twitter uses to detect tweets that are abusive or spam and keep them from appearing in trends. The organization Sleeping Giants, which pushes social media companies and advertisers to cut financial ties with far-right groups, has called on Twitter to disable the trends feature ahead of the November presidential election, saying it could spread disinformation about it.

➤NUGGETS COME BACK TO BEAT JAZZ IN FIRST ROUND AFTER BEING DOWN 3 GAMES TO 1: The Denver Nuggets beat the Utah Jazz 80-78 last night to complete their comeback from being down 3 games to 1 and win their first round playoffs series. Denver's Nikola Jokic got the tie-breaking basket with 27 second left in Game 7, and the victory was sealed when a three-pointer by Utah's Mike Conley spun out at the buzzer. The Nuggets became just the 12th team in NBA history to overcome a 3-1 deficit to win a series. They'll now face the Los Angeles Clippers in the Western Conference semifinals.

The THRILLING FINISH to Game 7!@nuggets win the series 4-3 and advance to play the Clippers in the West semis! #NBAPlayoffs pic.twitter.com/6AkuYn9EaV
— NBA (@NBA) September 2, 2020

➤MURRAY GETS BIG COMEBACK WIN AT U.S. OPEN: Andy Murray mounted a big comeback win on Day 2 at the U.S. Open Tuesday, coming back from being two sets down and at a match point before beating Yoshihito Nishioka in five sets. The 33-year-old Murray was playing in his first Grand Slam in nearly 20 months, after having his second hip operation in January 2019 that led him to believe he might have to retire. But yesterday he achieved his 10th career comeback from being two sets down for the win in the four-hour, 39-minute match. Other winners yesterday included Serena Williams, Sloane Stephens, Dominic Thiem and Garbine Muguruza. But Williams' sister, Venus Williams, lost to Karolina Muchova, the first loss of her career in the opening round of the U.S. Open.

➤TRUMP CALLS ON BIG 10 TO PLAY FOOTBALL IN THE FALL: President Trump is calling for the Big 10 to play football in the fall, after the conference decided in mid-August to postpone the season to the spring because of the coronavirus pandemic. Trump tweeted yesterday (September 1st) that he'd spoken with Big 10 Commissioner Kevin Warren about reinstating the fall season, calling it a "very productive conversation." He said, "Would be good (great!) for everyone - Players, Fans, Country. On the one yard line!" The Big 10 called the conversation "productive" as well. Trump downplayed the risk to players last Friday, saying, "These are big, strong guys. They’ll be just fine." A group of Nebraska players filed a lawsuit last week seeking a reversal of the decision. 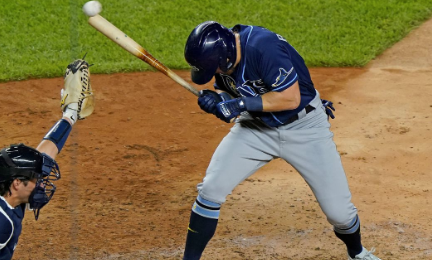 ➤TAMPA MANAGER MAKES THREAT AGAINST YANKEES: Tampa Bay Rays manager Kevin Cash make a threat against the New York Yankees last night after a game between the teams in which Yankees' closer Aroldis Chapman threw a 101-mile-per-hour pitch near the head of pinch-hitter Michael Brosseau in the ninth inning of New York's 5-3 win, leading the benches to empty. Cash told reporters, "It makes no sense. It’s poor judgment, poor coaching, it’s just poor teaching . . . Somebody’s got to be accountable. And the last thing I’ll say on this is I got a whole damn stable full of guys that throw 98 miles per hour." When told of Cash's threat, Yankees manager Aaron Boone said, "That’s a pretty scary comment. I don’t think that’s right at all."

➤KANSAS CITY CHIEFS GET CHAMPIONSHIP RINGS: The Kansas City Chiefs got their Super Bowl LIV Championship rings on Tuesday. Each player was presented with their ring in a ceremony on the field at Arrowhead Stadium. Each ring has 255 diamonds and 36 rubies, customized with each player's name and jersey number.
Posted 4:09:00 AM