Stars and Stripes Newspaper Will Continue 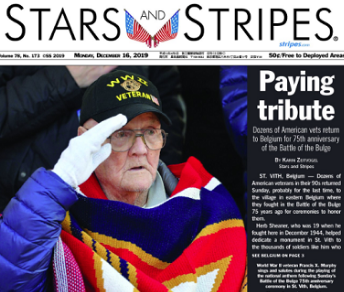 President Donald Trump on Friday reversed a decision to cut funding to Stars and Stripes, a newspaper that has served American soldiers since the Civil War, in an announcement that came hours after the outlet's demise was revealed.

“The United States of America will NOT be cutting funding to @starsandstripes magazine under my watch,” Trump tweeted Friday. “It will continue to be a wonderful source of information to our Great Military!”

In a previously unpublicized memo cited by USAToday on Friday, the Pentagon delivered an order to shutter the newspaper and cease publication after Sept. 30.

Press advocates decried the move, arguing it was the latest in a series of decisions by the Trump administration to undermine independent reporting. The initial order followed Trump's appointment of an ally to Steve Bannon, his former top adviser, to head the agency that oversees Voice of America.

"We are disgusted at this latest attempt by this administration to destroy the free press in this country," said Society of Professional Journalists President Patricia Gallagher Newberry.

"Stars and Stripes has been a lifeline and the source of much needed information, inspiration and support for troops all over the world, including places where communication with the outside world is at a minimum or nonexistent," she said.