➦In 1903...Arthur Godfrey was born. Godfrey is probably best known for his "Arthur Godfrey's Talent Scout" and was one of if not the most popular radio personalities of his day.

On leaving the Coast Guard, Godfrey became a radio announcer for the Baltimore station WFBR (now WJZ (AM)) and moved the short distance to Washington, D.C. to become a staff announcer for NBC-owned station WRC the same year and remained there until 1934.

Recovering from a near-fatal automobile accident en route to a flying lesson in 1931 (by which time he was already an avid flyer), he decided to listen closely to the radio and realized that the stiff, formal style then used by announcers could not connect with the average radio listener; the announcers spoke in stentorian tones, as if giving a formal speech to a crowd and not communicating on a personal level. Godfrey vowed that when he returned to the airwaves, he would affect a relaxed, informal style as if he were talking to just one person. He also used that style to do his own commercials and became a regional star.

➦In 1963...“American Bandstand” aired for the final time as a daily show on ABC-TV, it became a weekly show on Saturdays for another 26 years

It was nation’s first  free-form progressive rock format. Some legendary NYC disc jockeys, including Scott Muni and Murray “The K” Kaufman, were among the original WOR-FM staffers. 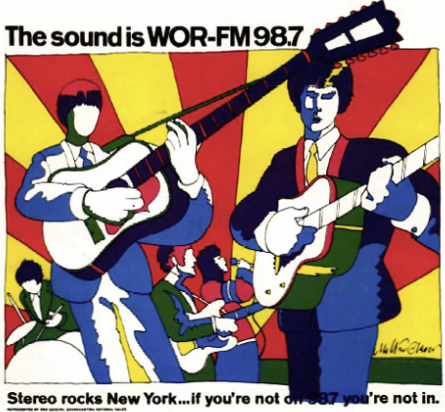 WOR-FM became popular on college campuses and the station racked up impressive ratings for an FM station in those days.

But owner RKO wanted to play just the hits.  It tweaked the format in 1967 to target a traditional Top 40 audience.  Consultant Bill Drake brought a version of his “Boss Radio” format, which had been popular on other RKO stations around the nation, to WOR-FM.  New York City’s version of the format was more oldies- and adult-oriented.

Today, the station is owned by Emmis Communications and leased by ESPN airing sports  as WEPN.

➦In 2011…Richard "Cactus" Pryor died (Born - January 7, 1923). He was a broadcaster and humorist. He received his nickname after the old Cactus Theater on Congress Avenue in Austin, Texas, which was run by his father, "Skinny" Pryor.

Pryor was first heard on Lady Bird Johnson's radio station KLBJ 590 AM, though his face became as well known as his voice once he moved to television broadcasting on Austin television station KTBC.

In addition to his work in radio and television, Pryor also appeared in two movies, Hellfighters and The Green Berets with John Wayne. He was the author of a 1995 collection of some 40 essays entitled Playback. At KTBC, Pryor had served as programming manager and had hosted a variety of shows. He had conducted interviews with celebrities such as Arthur Godfrey and Dan Blocker and narrated behind-the-scenes programs about KTBC.

He had three stints in New York radio from the late 1960s to the early 1980s. His work was varied, from air personality to programmer. His start in New York took place as WOR-FM evening jock in 1969. A year later, even though he bolted for Miami, Law was heard filling in on WWDJ, primarily on nights.

After some work in Denver, Law was back at WWDJ on a full-time basis as the station’s program director. Following the short gig at ‘WDJ, Law appeared at WXLO where he was hired solely as the “99X” program director.

However, Law’s dual hats would return in a big way at WNBC 660 AM. In 1974, he was named a joint assistant program director and air personality. Later that year, Law took over as program director but only briefly before resuming his APD/weekend air work. He remained at the NBC flagship until 1976.

After stints in Boston and Washington, Law had another coveted New York job. Musicradio 77WABC was a shadow of its former self in 1979. Disco caused WABC to plummet as 92/WKTU became NYC's most popular station. It was Law’s decision to stop the bleeding by doing the unthinkable, firing Harry Harrison, George Michael, and Chuck Leonard.

Law followed the “controversial” time at WABC with, arguably, his best success: a return to the NBC family at their FM.

“I hired Al to his first GM job at WYNY. The station had a great group of talent notably Dan Daniel, Dr. Ruth Westheimer and Bill St. James,” Walter Sabo tells FishbowlNY. “Al and the PD Pete Salant took the station to a 5.0 share. His background was pure programming, not sales, and that’s why he was capable of managing such rapid audience growth.”

Eventually, he was promoted to VP of programming at NBC Radio.