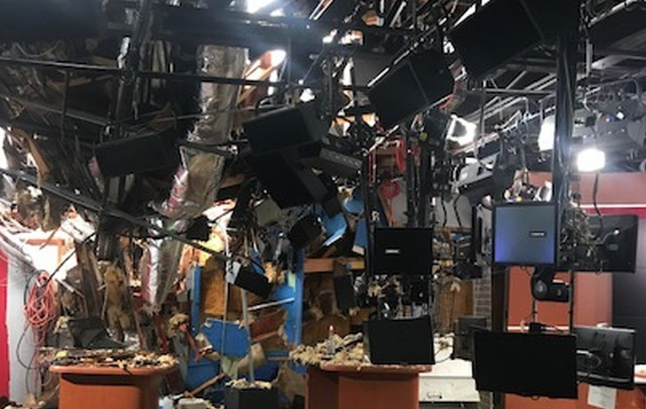 One of the worst-case scenarios for a television station played out early Thursday morning (Aug. 27) as the strong winds of Hurricane Laura moved into southwest Louisiana.

WAFB Baton Rouge reports the transmission tower of KPLC TV7 in Lake Charles LA was snapped in half during the fierce storm, sending the top portion of the tower tumbling down into the station’s broadcast studio below.

Photographs show a large amount of debris inside the station’s studio, where staff members would have been working had they not evacuated prior to the storm making landfall.

The damaged tower transmits the station’s signal to its larger main tower located about 25 miles away. Crews have been unable to reach the larger tower to inspect it because roads leading to it are covered with large trees.

The catastrophe, which knocked the historic television station off the air early Thursday morning, happened less than 12 hours after the station’s staff evacuated the building amid growing safety concerns.

Despite the evacuation and tower collapse, the station never stopped delivering news to its viewers.

KPLC GM John Ware believes it could be up to a year before the station’s operations are fully restored. ”We will be phasing things as we get estimates on how to address the tower and make our building safe,” Ware said.

Gray-owned KALB-TV in Alexandria, La., and Baton Rouge CBS affiliate WAFB-9 have played host to KPLC staff since the threat of Hurricane Laura turned into an emergency on Wednesday morning.

The storm didn’t create the feared storm surge many meteorologists warned off, and this spared the Townsquare Media offices and studios located along Interstate 10 to the north of downtown Lake Charles. However, the home of KPLC meteorologist Ben Terry is considered to be a “total loss” after the roof was ripped off.
Posted 2:47:00 AM