DAY THREE OF REPUBLICAN CONVENTION: Vice President Mike Pence accepted the vice presidential nomination for a second term on the third night of the Republican National Convention last night, speaking from Baltimore’s Fort McHenry before a crowd of people. Pence leveled attacks on Democratic presidential nominee Joe Biden, including the repeated theme that he's just a "Trojan horse for the radical left." He hailed President Trump and his leadership, including defending his handling of the coronavirus pandemic.


With gratitude for the confidence President Donald Trump has placed in me, the support of our Republican Party, and the grace of God, I humbly accept your nomination to run and serve as Vice President of the United States! 🇺🇸 pic.twitter.com/pRRxoGgjET
— Mike Pence (@Mike_Pence) August 27, 2020


Pence also continued the law and order theme that has been a consistent part of the message during the convention, saying, "You won't be safe in Joe Biden's America." He also spoke about against the violence there has been at some of the protests against racial injustice, declaring, "The violence must stop," and defended the police, stating, "The American people know we don’t have to choose between supporting law enforcement and standing with African American neighbors to improve the quality of life in our cities and towns."

Among the other speakers last night were: Trump's daughter-in-law Lara Trump; Kellyanne Conway, senior counselor to the president who recently announced she's leaving the administration; and Richard Grenell, former ambassador to Germany and former acting Director of National Intelligence. The night's themes they and others talked about included celebrating women and everyday "heroes," and reinforcing the law-and-order message. 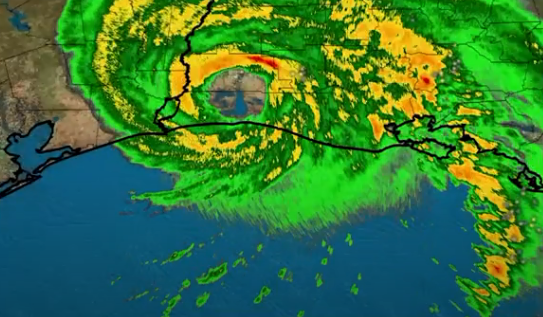 ➤HURRICANE LAURA MAKES LANDFALL AS POWERFUL CATEGORY 4 STORM: Hurricane Laura made landfall early this morning as a powerful Category 4 storm with maximum sustained winds of 150 miles per hour in Cameron, Louisiana, near the Texas border.


The National Hurricane Center called the storm "extremely dangerous" and warned of a storm surge that could be up to 20 feet deep and, in its words, "unsurvivable." Mandatory evacuation orders had been issued by the governors of Louisiana and Texas for more than 500,000 residents, made more complicated by the coronavirus pandemic.

Flood watches were issued for much of Arkansas because of the heavy rainfall expected from Laura, and there was also a risk of tornadoes. 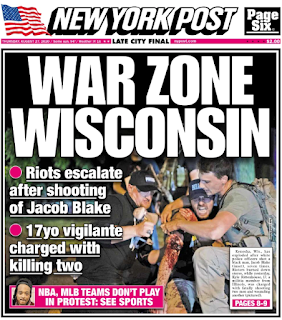 ➤ILLINOIS 17-YEAR-OLD ARRESTED FOR MURDER IN KILLING OF TWO AT KENOSHA PROTESTS: An Illinois 17-year-old, Kyle Rittenhouse, was arrested on murder charges yesterday in the shooting deaths of two people the night before at the protests in Kenosha, Wisconsin, that have been going on since the police shooting of a 29-year-old Black man, Jacob Blake, on Sunday. A third person was wounded in the attack, much of which was captured on cell phone video. Rittenhouse, who is white and was carrying a semiautomatic rifle, could be heard saying, "I just killed somebody," but was not apprehended by police as he walked past them and was able to go home, where he was arrested the next day.

The victims' names weren't released. Sheriff David Beth told the Milwaukee Journal Sentinel that armed vigilante militia members had been patrolling in Kenosha in recent nights, but he didn't know if Rittenhouse was among them. However, video taken before the shooting shows police tossing bottled water to armed civilians, and Rittenhouse appears to be one of them. An officer is heard saying, "We appreciate you being here."

Wisconsin Governor Tony Evers has deployed 500 members of the National Guard and is working with other states to bring in more Guard members and law officers as there was another night of protests last night. However, they were mostly peaceful as of early this morning, in contrast to earlier nights that had seen arson and clashes with police. There were also no armed civilians patrolling.

➤CDC GUIDELINES CHANGE ON TESTING CRITICIZED BY PUBLIC HEALTH EXPERTS MADE UNDER TOP ADMINISTRATION PRESSURE: A change in the guidelines from the Centers for Disease Control and Prevention for coronavirus testing that has drawn criticism from public health experts was made under pressure from the top ranks of the Trump administration, CNN cited a federal health official described as being close to the process as saying yesterday. Additionally, Dr. Anthony Fauci, the nation's top infectious disease specialist and a member of the White House coronavirus task force, told CNN that he was in surgery for a vocal cord nodule during the August 20th task force meeting when the change was discussed. The guidelines change advises that some people without symptoms don't need to get tested, even if they were in close contact with someone infected with the coronavirus. Fauci said, "I am . . . worried it will give people the incorrect assumption that asymptomatic spread is not of great concern. In fact it is." Health and Human Services Assistant Secretary Brett Giror told CNN that guidance had been updated to, quote, "reflect current evidence and best health practices," and that the focus was to do more "appropriate" testing, not less of it. Not explained was what the current evidence was that led to the change.

➤BODY OF MISSING FORT HOOD SOLDIER FOUND: The body of a 23-year-old soldier who's been missing from Fort Hood in Texas for more than a week was found late Tuesday.

The news was announced Wednesday by an attorney for the family of Sergeant Elder Fernandes, who said his body was found hanging in a tree near Lake Polk, about 30 miles from the base. Police said there was no indication of foul play. An Army public affairs officer said last week that Fernandes had previously transferred units after reporting sexual abuse, and that an investigation into the charge was still open. The family's attorney said Fernandes was sexually assaulted by his sergeant and was then, quote, "bullied and hazed for reporting it."

➤LARA TRUMP ATTRIBUTES FALSE QUOTE TO LINCOLN AT CONVENTION: This is why you never trust the internet without double-checking. President Trump's daughter-in-law, Lara Trump, attributed a false quote to Abraham Lincoln when she spoke on the third night of the Republican National Convention last night. Trump cited Lincoln as saying: "America will never be destroyed from the outside. If we falter and lose our freedoms, it will be because we destroyed ourselves." But that's actually what's been called a "corruption" of a real Lincoln quote about "the perpetuation of our political institutions," and it has been debunked several times.

➤McDONALD'S WIDENING MISCONDUCT PROBE INTO EX-CEO: McDonald's announced Wednesday that it's widening it's misconduct probe into the actions of former CEO Steve Easterbrook. The fast food giant says Easterbrook covered up the number of sexual relationships he had with employees, and may have also covered up misconduct by other executives. McDonald's is expanding its probe to include the human resources department, which was led by Easterbrook's friend David Fairhurst. The Wall Street Journal cited sources as saying Fairhurst regularly socialized outside the office with employees, and there was an internal investigation in 2018 after an employee complained about "inappropriate physical contact" between Fairhurst and a subordinate at a holiday party. Fairhurst left the company days after Easterbrook was fired last year, and McDonald's admitted this week that he was fired for inappropriate conduct. 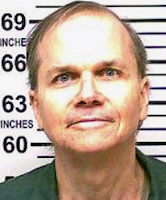 State corrections officials said Wednesday that Chapman, who's now 65, was interviewed by a parole board last week. He is serving a sentence of 20 years to life. Chapman’s next parole hearing is scheduled for August 2022.

➤BEZOS BECOMES FIRST WORTH OVER $200 BILLION: Amazon founder and CEO Jeff Bezos became the first person worth over $200 billion on Wednesday, according to Forbes. Bezos, the world's wealthiest person, has seen his worth rise as Amazon stock has skyrocketed during the coronavirus pandemic. Just four months ago, in April, Bezos' worth was nearly half of what it is now, at $113 billion. Bezos owns 11 percent of Amazon stock. ➤NBA PLAYOFFS GAMES POSTPONED AS PLAYERS SIT OUT IN PROTEST OF RACIAL INJUSTICE: The three first-round NBA playoffs games that were supposed to be played yesterday were postponed when the players decided to sit them out in protest over racial injustice, their action coming the wake of the police shooting of Jacob Blake, a 29-year-old Black man, in Kenosha, Wisconsin, on Sunday. The protest was begun by the Milwaukee Bucks, who play about 40 miles from Kenosha, who refused to come out of the locker room for their game against the Orlando Magic.

Bucks players Sterling Brown and George Hill read a statement on behalf of the team, saying, "There has been no action, so our focus today cannot be on basketball." The other playoff games that didn't take place was one between Oklahoma City and Houston and the other between the L.A. Lakers and Portland. The NBA didn't say when Wednesday's scheduled games would be played, or if the three playoff games set for today will take place.

➤MLB, WNBA, MLS GAMES POSTPONED IN PLAYER PROTESTS: After news spread about the NBA players sitting out their playoff games yesterday in protest of racial injustice, some players in other sports followed as well. All three scheduled WNBA games were postponed, three MLB games were called off, and five MLS matches were cancelled because players decided they would boycott them. The MLB games postponed were those between the Cincinnati Reds and Milwaukee Brewers, the Seattle Mariners and San Diego Padres, and the L.A. Dodgers and San Francisco Giants. All are set to be made up in doubleheaders today.

➤NHL PLAYOFFS: Results from second-round playoff games yesterday:
➤PACERS FIRE HEAD COACH McMILLAN: The Indiana Pacers fired head coach Nate McMillan on Wednesday, two days after the team was swept by the Miami Heat, the second year in a row they've been swept in the first round of the NBA playoffs. The unexpected news came just two weeks after it was announced that McMillan had been given a one-year contract extension. McMillan was head coach of the Pacers for four seasons.

Post Exclusive: “We have a hotel room,” Redskins owner Dan Snyder allegedly told one of his team's cheerleaders, urging her to join one of the team's doctors. “Why don’t you and Tony go upstairs and get to know each other better?” https://t.co/78noqTndeH
— Marc Fisher (@mffisher) August 26, 2020


➤'POST': WASHINGTON OWNER SNYDER INVOLVED IN SEXUAL HARASSMENT: The Washington Post reported allegations Wednesday that Washington Football Team owner Dan Snyder was personally involved in workplace sexual harassment within the organization. A former cheerleader charged that Snyder invited her to a hotel room with one of his friends in 2004, and that a team executive made extra cheerleading videos for Snyder showing sensitive material that wasn’t made public, according to the Post. Snyder denied the allegations. After a Post story last month about sexual harassment in the Washington organization, Snyder promised to make changes and agreed to an independent investigation.
Posted 4:12:00 AM