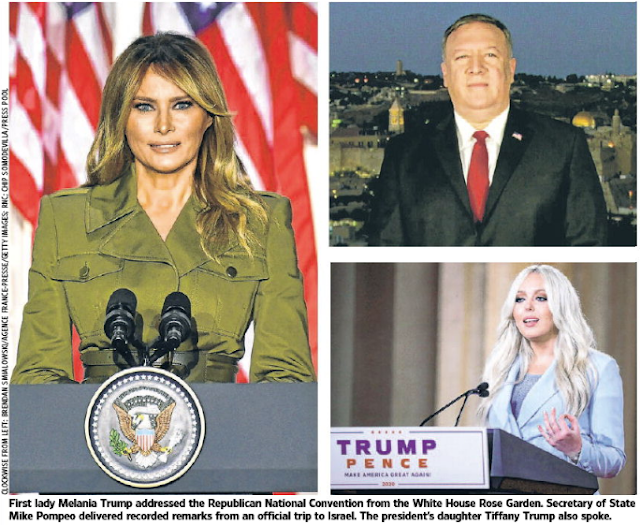 First Lady Melania Trump was the main speaker on the second night of the Republican National Convention last night, portraying her husband as an authentic leader who gets results and deserves a second term to continue to do more for America. Speaking from the newly-renovated Rose Garden, the first lady expressed sympathy and prayers for those who have lost loved ones to the coronavirus or who are themselves sick with it, and said to those who she said might be feeling "anxious" or "helpless," "I want you to know you are not alone."

The Rose Garden speech, held before about 50 people, was one of several convention events being held at the White House, including President Trump's acceptance speech later this week, which has raised ethical concerns. Among them were two other White House events aired last night: Trump pardoning a reformed bank robber Jon Ponder, who founded an organization that helps prisoners reintegrate into society, and overseeing a naturalization ceremony for five immigrants. The ceremonies additionally drew concerns about Trump using official acts for a political convention.

Also speaking last night was Secretary of State Mike Pompeo, who named some of Trump's foreign policy achievements. Pompeo spoke from Jerusalem, where he was on an official overseas trip. His appearance broke with decades of tradition of secretaries of state avoiding the appearance of involvement in domestic politics, and also drew some criticism. Two other major speakers were Trump's middle son, Eric Trump, who reeled off a list of Trump's accomplishments and said it was "promises made and promises kept" and his youngest daughter, Tiffany Trump, who urged voters to, quote, "transcend political boundaries."

Former Florida Attorney General Pam Bondi launched into an attack on Democratic presidential nominee Joe Biden, accusing him of corruption as she brought up the Ukraine allegations involving his son, Hunter Biden, the same claims Trump wanted Ukraine to look into that led to his impeachment earlier this year. In response, Andrew Bates of the Biden campaign said, "Here on planet Earth, the conspiracy theory that Bondi repeated has been conclusively refuted." She also make accusations about Hunter regarded China, and make other vague allegations about other unidentified Biden family members that she claimed amounted to corruption.

Nick Sandmann, the Kentucky high school student whose tense interaction in Washington, D.C., with a Native American man last year became a national story, with claims that he was disrespectful to the older man, also spoke. Sandmann, who has sued several media organizations, accused the media of going into "attack mode" against him because they wanted to advance a, quote, "anti-Christian, anti-conservative, anti-Donald Trump narrative."

➤REPUBLICAN CONVENTION SPEAKER PULLED AT LAST MINUTES AFTER RETWEETING ANTI-SEMITIC TWEETS: A woman who was supposed to speak on the second day of the Republican National Convention last night was pulled at the last minute after she retweeted anti-Semitic tweets.

Mary Ann Mendoza lost her son in 2014 to a drunk driver who who was in the country illegally and was set to speak about President Trump's efforts against illegal immigration. Mendoza wrote: "Do yourself a favor and read this thread" over her retweet of a series of tweets that included what Politico described as, quote, "nearly every anti-Semitic trope of the last century to portray a Jewish cabal set on taking over American government." Mendoza later deleted the post and apologized, saying she'd, quote, "retweeted a very long thread earlier without reading every post within the thread."

➤FALWELL JR. RESIGNS FROM LIBERTY UNIVERSITY OVER SEX SCANDAL: One day after Liberty University said that president Jerry Falwell Jr. had offered to resign over a sex scandal and then reversed himself, Falwell made it official Tuesday, saying he's resigned as head of the evangelical university. Falwell had said Sunday that his wife, Becki Falwell, had a brief affair and they reconciled, but the man involved had been threatening to reveal it. But Reuters reported Monday that Falwell knew about what was a years-long affair with the much younger man, Giancarlo Granda, and participated in it by watching their encounters. Falwell has denied any participation. He told AP yesterday, "That’s the only reason I resigned: because I don’t want something my wife did to harm the school I’ve spent my whole life building. I never broke a single rule that applies to staff members at Liberty, which I was." Becki also spoke to AP, saying, "We have the strongest relationship, and Jerry is the most forgiving person I’ve ever met. It’s a shame that Christians can’t give us the same forgiveness that Christ gave us."

➤BLAKE'S FAMILY SAYS HE'S PARALYZED FROM WAIST DOWN: The family of Jacob Blake, the 29-year-old Black man who was shot multiple times by police in Kenosha, Wisconsin, over the weekend, said Tuesday (August 25th) that his spinal cord was severed and he's paralyzed from the waist down. The family's attorney, Ben Crump, said, "It’s going to take a miracle for Jacob Blake Jr. to ever walk again," and also called for the officer who shot Blake to be arrested and for the others involved to lose their jobs. Blake's father, Jacob Blake, told reporters, "They shot my son seven times, seven times, like he didn’t matter. But my son matters. He’s a human being and he matters." Police have revealed little of the circumstances of the shooting, which was captured on cellphone video, saying the officers were responding to a domestic dispute. The Wisconsin Department of Justice is investigating.


There were protests for a third night last night, with some demonstrators throwing water bottles and fireworks at police officers at the courthouse, who fired tear gas back. Police also used armored vehicles and shields as they pushed back the crowd when protesters, who were out past an 8 p.m. curfew, ignored warnings to leave a nearby park. Governor Tony Evers declared a state of emergency and deployed 250 National Guard members, double from the previous night, when dozens of buildings were destroyed and more than 30 fires set in downtown Kenosha. Blake's mother, Julia Jackson, said the violence by the protesters isn't what the family wants.

➤AMERICAN AIRLINES TO CUT MORE THAN 40,000 JOBS: American Airlines said yesterday that it will cut more than 40,000 jobs in October, including 19,000 through furloughs and layoffs, as a consequence of the plunge in travel due to the coronavirus pandemic. American said that 23,500 workers had accepted buyouts, retired early or taken long-terms leaves of absence, but that wasn't enough to avoid job cuts. American said furloughs can only be avoided if the federal government gives airlines another $25 billion to help cover labor costs for another six months. Airlines got $25 billion from the government in March to save jobs for six months, with American getting the most, $5.8 billion. The money, which came with a ban on furloughs, expires at the end of September. 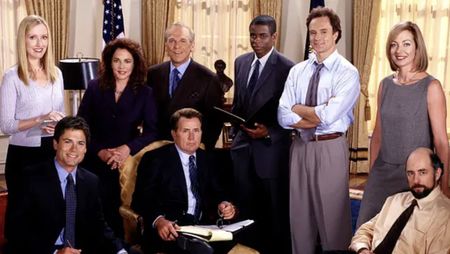 ➤WEST WING REUNION SET: After 17 years, The West Wing cast is coming back together for a special episode on HBO Max. The show’s creator Aaron Sorkin announced the move, saying it will also serve as a push to get people to vote in the presidential election. A West Wing Special to Benefit When We All Vote will drop on HBO Max this fall and will be produced in partnership with Michelle Obama’s When We All Vote, a nonprofit and nonpartisan org. Stars Rob Lowe, Dulé Hill, Allison Janney, Janel Moloney, Richard Schiff, Bradley Whitford and Martin Sheen are all reprising their roles from the episode. "One of the reasons why The West Wing resonated so much for me on a personal level was — maybe it’s corny — I really believe in all things that are truisms about our country," Lowe told EW. "If you’re not going to vote, then you don’t have a dog in the fight and you shouldn’t complain. Empowering people to vote, making it easier for people to vote, is a total no-brainer. I’ve been working on it for many years and it feels like it becomes more important with each passing election cycle."

➤HOME IMPROVEMENT 2.0: Tim Allen and Richard Karn are reuniting after starring in the 90s megahit Home Improvement. The comedians are teaming back up for a competition series on History titled Assembly Required. It has been greenlit for 10 episodes. The show will "spotlight the brightest builders from across the country," as they "breathe new life into everyday household items in desperate need of fixing." 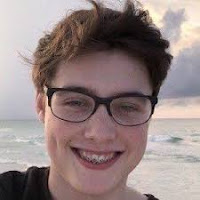 ➤LANDON CLIFFORD DIES AT 19: YouTube star Landon Clifford has died at 19, his wife Camryn shared. The Cam & Fam star died on August 13th, the 19-year-old Camryn wrote to her 472K followers. After suffering a brain injury, he died. She wrote: “After spending the following 6 days in a coma he passed on and donated several organs to people in need all over the country. He died saving the lives of others. That’s the type of person he was.” In a post shared on Instagram earlier this month, Camryn asked followers to help “stop the stigma around mental health. You never know what someone else is going through so always choose to show kindness and grace.”

➤WHITE SOX'S GIOLITO PITCHES NO-HITTER: Chicago White Sox pitcher Lucas Giolito threw a no-hitter last night, the first of the coronavirus-shortened season, in a 4-0 win over the Pittsburgh Pirates. Giolito struck out 13 batters, and fell short of a perfect game only with a fourth-inning walk. Normally, the home-field fans in Chicago would have been wildly cheering, but instead Giolito's no-hitter came before empty stands and was celebrated only by his teammates.

➤NHL PLAYOFFS: Results from second-round playoff games yesterday:
➤LIONS DECIDE TO SKIP PRACTICE AFTER DISCUSSING JAMES BLAKE'S SHOOTING: The Detroit Lions decided to skip practice yesterday after discussing in their morning meeting the police shooting Sunday in Kenosha, Wisconsin, of James Blake, a 29-year-old Black man who family members say is now paralyzed from the waist down. Afterward, the players and coach Matt Patricia left the practice facility and brought a dry-erase board on wheels to the sidewalk, addressing the media with a message on it that said: "The world can’t go on," on one side, and "We won’t be silent!! One pride," on the other side. Patricia said he was proud of his players.

➤GROUP HEADED BY LEBRON LAUNCHING EFFORT TO RECRUIT POLL WORKERS: More Than a Vote, an organization of athletes led by NBA superstar LeBron James that's working to fight voter suppression, is launching an effort to recruit more poll workers in Black electoral districts before the November election. The project, being done along with the NAACP Legal Defense Fund, aims to recruit young people to be poll workers in Black communities in swing states, including Georgia, Michigan, Wisconsin, Florida and Ohio.

➤KOBE BRYANT CRASH HELICOPTER COMPANY SUING AIR TRAFFIC CONTROLLERS: Island Express Helicopters, the company that operated the helicopter involved in the crash that killed Kobe Bryant, his daughter and seven others, is suing two air traffic controllers, USA Today reported Tuesday (August 25th), citing court records. In its suit, the company alleges that the January crash was the result of, quote, "a series of erroneous acts and/or omissions" by two air traffic controllers. Island Express is facing lawsuits from the family of Bryant and other crash victims. 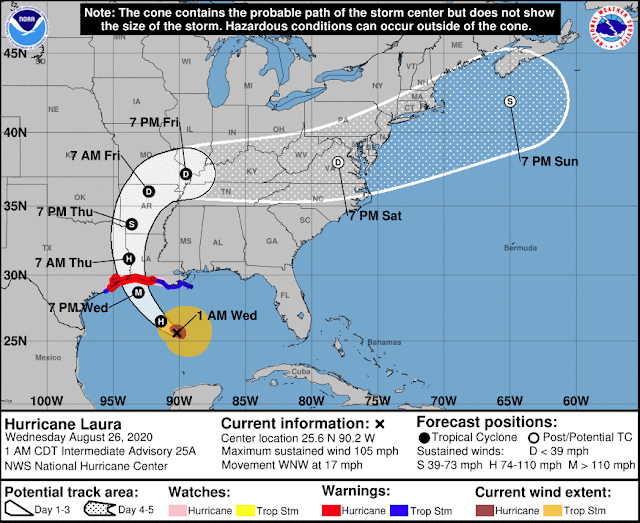 ➤GULF COAST BRACES:  Hurricane Laura is rapidly intensifying over the Gulf of Mexico and expected to strike the upper Texas or southwest Louisiana coasts as a major hurricane late Wednesday or early Thursday. Life-threatening storm surge and destructive winds will batter the region and a threat of flooding rain and strong winds will extend well inland. 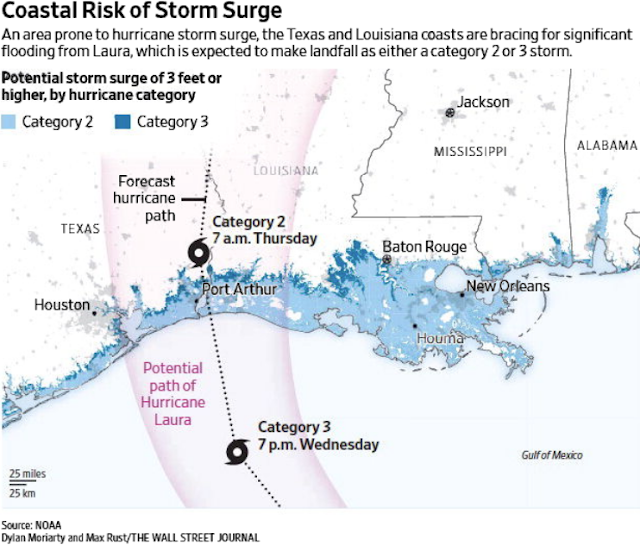