The Rundown: Trump States His Case

President Trump accepted the Republican nomination for a second presidential term last night on the final night of the party's convention, delivering a speech from the South Lawn of the White House that repeatedly blasted his Democratic opponent Joe Biden. Trump broke from long tradition and regulation of keeping partisan political events away from the White House, and addressed an audience of about 1,500 amid the pandemic who were seated close together and mostly not wearing masks.

Trump portrayed Biden as a weak, career politician who'll be a tool of the radical left and hasn't gotten anything done in nearly 50 years in politics. He gave dire warnings of what electing Biden and the Democrats would bring, declaring that, among other things, they'd destroy the suburbs, take away Americans' guns, bring lawlessness to people's communities and impose socialism. He also decried "cancel culture," something that's been repeated throughout the convention.

Trump spent a significant amount of time taking about what he'd accomplished in his four years in office, saying, "From the moment I left my former life behind . . . I have done nothing but fight for you," and adding, "I kept my promise." He also praised his administration's handling of the coronavirus, despite the criticism he's received, and said that that we would have a vaccine by the end of the year or even sooner.

At the end of the speech, Trump, his family and the audience watched fireworks that were set off around the Washington Monument on the National Mall.

Other speakers on the final night of the convention included Trump's daughter and senior adviser Ivanka Trump, who introduced him before his speech as the "people's president." Former New York City Mayor and Trump attorney Rudy Giuliani decried what he described as lawlessness in cities run by Democrats, blasting the Black Lives Matter movement and antifa and contending that Democrats want violence because they think it will help defeat Trump.

Trump's Secretary of Housing and Urban Development, Ben Carson, addressed the situation in Kenosha, Wisconsin, where days of sometimes violent protests have taken place since the police shooting of Jacob Blake, a 29-year-old Black Man. He said, "I'd like to say that our hearts go out to the Blake family and the other families who have been impacted by the tragic events in Kenosha."

Alice Johnson, who was released from prison after clemency was granted by Trump, spoke about the second chance she'd been given, and praised his signing of the First Step Act, a criminal justice reform bill.


➤HURRICANE LAURA KILLS AT LEAST SIX, DAMAGE NOT AS BAD AS FEARED: After making landfall early Thursday morning as a strong Category 4 storm in southwestern Louisiana near the border with Texas, Hurricane Laura roared across Louisiana, bringing destruction far inland, not losing hurricane status until 11 hours later as it moved into Arkansas and then eventually weakening into a tropical depression by evening. Laura left at least six people dead, but while determining the extent of the damage will take days, it didn't appear to have been as bad had been feared when forecasters were predicting a possible 20-foot storm surge they called "unsurvivable." In the end, the storm surge was around nine to 12 feet, which is still high, but not as catastrophic. One of the worst-hit places was the city of Lake Charles, Louisiana. President Trump plans to visit the Gulf Coast this weekend to tour the damage.

➤SUSPECT IN KILLING OF TWO IN KENOSHA FACES MORE HOMICIDE CHARGES: The 17-year-old suspect in the fatal shooting of two people during protests in Kenosha, Wisconsin, earlier this week and the wounding of a third is facing more homicide charges. Kyle Rittenhouse, who lives in Antioch, Illinois, had been charged with first-degree intentional homicide since his arrest on Wednesday, a day after the shooting. Court records show that prosecutors filed more charges against him Thursday, adding one count of reckless homicide, a count for attempted intentional homicide and two counts of recklessly endangering safety. He's also being charged with possession of a dangerous weapon while under age 18.

The shooting by Rittenhouse took place during protests over the police shooting of Jacob Blake, a 29-year-old Black man, on Sunday. In video that captured much of the shooting, Rittenhouse is seen carrying a semiautomatic rifle and could be heard saying, "I just killed somebody," but was not apprehended by police as he walked past them and was able to go home, where he was arrested the next day. Sheriff David Beth told the Milwaukee Journal Sentinel Wednesday that armed vigilante militia members had been patrolling in Kenosha in recent nights after there'd been some 30 buildings set on fire, but he didn't know if Rittenhouse was among them. However, video taken before the shooting shows police tossing bottled water to armed civilians, and Rittenhouse appears to be one of them.

➤JAPAN'S PRIME MINISTER ABE RESIGNING BECAUSE OF HEALTH CONCERNS: Japanese Prime Minister Shinzo Abe will be resigning because of declining health, according to media reports Friday in Japan. The 65-year-old Abe, Japan's longest-serving prime minister, has been in office since 2012. He is expected to stay in his position until a new party leader is elected and formally approved by the parliament.

➤JUDGE ORDERS ADMIN, POSTAL SERVICE TO TURN OVER INFO ON SERVICE CHANGES: A federal judge yesterday ordered the Trump administration and the U.S. Postal Service to turn over records and information about service changes that have drawn complaints about slowed mail and concerns about mail-in voting in November. More than 20 states filed lawsuits last week over the changes, including 14 states that sued in U.S. District Court in Washington state, where the federal judge is located. U.S. District Judge Stanley Bastian granted the states’ request to speed up discovery, giving 10 days for the information to be provided.

➤WALMART JOINS MICROSOFT IN BID TO BUY TIKTOK: Walmart has joined with Microsoft in a bid to buy TikTok's U.S. business, the Associated Press reported Thursday (August 27th). The bid comes as the White House seeks to bar TikTok from the U.S. unless the popular video app's Chinese owner, ByteDance, sells its U.S. business, citing national security concerns. Other tech companies are also reportedly interest in possibly buying TikTok's U.S. operations. The Wall Street Journal reported yesterday that ByteDance is seeking about $30 billion it, but no-one's been willing to meet that price so far.

➤LORD & TAYLOR CLOSING ALL STORES AFTER NEARLY TWO CENTURIES: Lord & Taylor, the nation's first department store, is closing all its remaining stores after nearly two centuries in business. The company, which filed bankruptcy on August 2nd, announced yesterday (August 27th) that it's 38 stores would close for good, and that they and its website have begun liquidation sales. That's a change from just last week, when it said it would keep 14 locations open. The first Lord & Taylor was opened on the Lower East Side of Manhattan in 1826 by English immigrants Samuel Lord and George Washington Taylor. 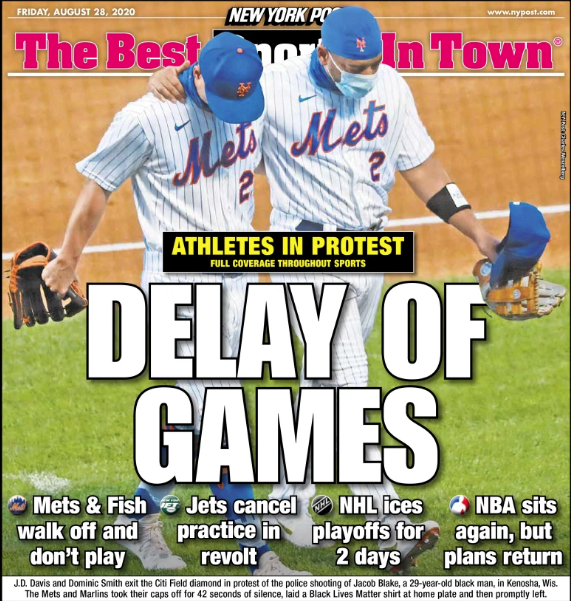 ➤NO NBA PLAYOFFS FOR A SECOND DAY IN RACIAL INJUSTICE PROTEST: NBA playoff games were postponed for a second day Thursday as players continued their walkout in protest of racial injustice, with the three games called off added to the three canceled the day before. The work action began with the Milwaukee Bucks Wednesday in the wake of the police shooting of Jacob Blake, a 29-year-old Black man, in Kenosha, Wisconsin, on Sunday. NBA players considered not playing for the rest of the postseason and going home to their communities, but decided they would finish the postseason. An NBA spokesman said they hoped to resume play today or Saturday. President Trump criticized the NBA yesterday, telling reporters, "They’ve become like a political organization, and that’s not a good thing."

➤NHL CANCELS TWO DAYS OF PLAYOFFS: The NHL postponed two days of playoff games yesterday and today in protest of racial injustice, joining the NBA, WNBA and some MLB teams who are sitting out games. The decision was made after members of the Vegas Golden Knights and Vancouver Canucks were prepared to sit out their playoff game, and in the face of criticism from Black players for not taking action. The league and the players association jointly announced the action, saying, "The NHL and NHLPA recognize that much work remains to be done before we can play an appropriate role in a discussion centered on diversity, inclusion and social justice." The four second-round games missed will be played on Saturday.

The Mets and Marlins took the field, had a 42-second moment of silence, and then walked off.

The only thing left on the field: a Black Lives Matter shirt.pic.twitter.com/JyckWkGQai
— Complex Sports (@ComplexSports) August 27, 2020


➤SEVEN MLB GAMES POSTPONED, TWO TEAMS WALKED OFF THE FIELD: Unlike the NBA, NHL and WNBA, MLB hasn't so far taken league-wide action to postpone games in protest of racial injustice. Instead, eight games were played yesterday, but seven were postponed, including one in which the players walked off the field after the national anthem. The New York Mets and Miami Marlins walked off the field together after a moment of silence, leaving a Black Lives Matter T-shirt over home plate as they decided not to play.

➤NINE NFL TEAMS CANCEL PRACTICE TO PROTEST RACIAL INJUSTICE: Nine NFL teams canceled practice yesterday in protest of racial injustice. New York Jets running back Le'Veon Bell tweeted, "We’ve been protecting the shield,” referring to the NFL, "It's time for the shield to protect us." The Denver Broncos, one of the teams that canceled practice, took a team photo that was tweeted with a statement that said: "In the strongest terms, we condemn police brutality, excessive force and these senseless acts of violence that have caused so much pain. It is time for accountability and real policy reform." Nineteen teams did practice.

➤NEBRASKA PLAYERS FILE SUIT HOPING TO FORCE SEASON: A group of Nebraska football players filed a lawsuit yesterday in hopes of forcing the Big Ten Conference to reinstate a fall football season. The Big Ten plans to move the season to the spring because of the coronavirus pandemic. Among its claims, the lawsuit says players are losing a chance for development, exposure for a possible pro career, and won’t be able to market themselves to eventually capitalize on name, image and likeness revenue opportunities. The Big Ten said the suit has "no merit."

➤HALL OF FAME ARIZONA BASKETBALL COACH LUTE OLSEN DEAD AT 85: Hall of Fame coach Lute Olson, who built Arizona basketball into a national power, died Thursday at age 85. Olson led Arizona to four Final Four appearances in 24 seasons, and its only NCAA championship in 1997. He was inducted into the Hall of Fame in 2002.
Posted 4:15:00 AM