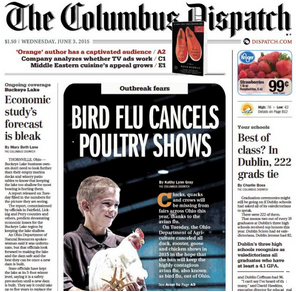 The Dispatch Printing Company has reached an agreement to sell its print publications to the New Media Investment Group Inc., based in New York, N.Y.

The sale includes The Dispatch, owned by the Wolfe family for 110 years; ThisWeek Newspapers, a collection of 24 suburban weeklies; and seven magazines, including Columbus Monthly, Columbus CEO and Capital Style.

The Wolfe family will continue to own and operate its broadcast holdings: WBNS-TV, the CBS affiliate in Columbus; WTHR-TV, the NBC affiliate in Indianapolis; RadiOhio Inc., which operates WBNS AM & FM radio stations; and the Ohio News Network, which supplies news, weather and sports to 70 radio stations across Ohio.

John F. Wolfe, chairman and publisher of The Dispatch, said the decision to sell was extraordinarily difficult, and only made after several years of careful assessment of the changing media landscape.

“We are proud of our 110-year legacy of family ownership of The Dispatch, and the newspaper’s heritage of quality journalism and community involvement,” Wolfe said.

“However, the past two decades of accelerating and challenging change in the newspaper industry made it clear to us that maintaining a single-city, family-owned paper in this environment was untenable long-term,” he said.

New Media Investment Group is a holding company that emerged from the bankruptcy of GateHouse Media Inc. in 2013. The company controls 126 dailies among its 550 publications in 32 states. The dailies include The Repository of Canton, Ohio, the Las Vegas Review-Journal, The Providence Journal and the Sarasota Herald-Tribune. New Media also operates a national network of advertising and digital marketing businesses.
Posted 3:25:00 AM