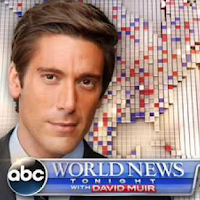 ABC's “World News Tonight’s” ratings ascension started even before ABC decided to replace anchor Diane Sawyer with rising star 41-year-old David Muir in September. At the same time, the venerable broadcast has slowly evolved into a newscast engineered for the social media age. In important ways, “World News” looks and sounds different from its competitors. It’s brighter, tighter and indeed quite a bit lighter than its evening rivals, according to media writer Paul Farhi at The Washington Post.

Under Sawyer, “World News” became noticeably softer, with a greater emphasis on celebrity and entertainment stories, weather coverage, crime fare, news-you-can-use and YouTube’s hottest videos. The trend has continued, and perhaps accelerated, with Muir at the anchor desk.

News from Washington — a staple of the broadcast since its Peter Jennings glory years — now fights for air. It usually loses: “World News” devoted half as many minutes to Washington stories as CBS did during the first four months of the year, and about 40 percent less than did NBC.

However, the Sawyer-to-Muir transition may have been the most important element in ABC’s ascension, said an NBC news executive, who spoke on the condition of anonymity because he’s not authorized to speak for the network. “As long as Diane was on the show, they were not going to win,” he said. “When David Muir filled in [for her], bang, they’d win the day. I can tell you that ‘Nightly’ was dreading the moment Diane retired” and Muir took over.

ABC executives acknowledge that their newscast is different but say that’s a positive development. The faster pace and sometimes offbeat story mix are designed for an audience that is already saturated with news, said Almin Karamehmedovic, executive producer of “World News Tonight.” “By 6:30, when we come on the air, most of our audience may have heard about” the major stories of the day, he said. “We’d like to give them a full picture . . . and to put it all in perspective.”