In 1940...Superjock Larry Lee Blankenburg a.k.a Larry Lujack was born in 1940 in Quasqueton, Iowa, and reared in Caldwell, Idaho. At 18 he joined KCID-AM in Caldwell, adopting the surname of his idol, the Chicago Bears quarterback Johnny Lujack. 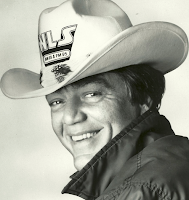 After working at stations in Idaho and Washington State, Mr. Lujack joined WCFL in 1967 and moved to WLS four months later. Except for a four-year stint back at WCFL, he remained with WLS for the next two decades.

In 1984 WLS gave Lujack a 12-year, $6 million contract, making him one of the country’s highest-paid radio personalities. (“I am not the least bit excited,” he was reported to have said.) But in 1987, amid declining ratings, the station’s corporate parent, Capital Cities-ABC, bought out his contract.

His honors include membership in the Illinois Broadcasters Association Hall of Fame (“It’s not Mount Rushmore,” he said on learning of his induction) and the National Radio Hall of Fame.

War correspondent Wright Bryan gives detail of his flight with paratroopers over occupied France. News and reactions from around the world of the allied invasion. plus more. Some of it is harder to hear for static, but I like the originality of the broadcast, especially Eisenhowers message to occupied Europe. Its like its 1944 and your sitting by the radio listening to it when it happened.

In  1944….Radio covered first news of the Allies’ D-Day Invasion…

William Wright Bryan, a former editor of the Atlanta Journal was the first World War II correspondent to broadcast an eyewitness account of D-Day.  He was the newspaper's managing editor, war correspondent and an NBC radio stringer when he became the first newsman to give a report on the D-Day invasion of France on June 6, 1944.

He covered the invasion from a transport plane dropping airborne troops. When the plane flew back to London, Bryan went on the air and made his broadcast immediately after a one-sentence announcement by the Allied command and tape-recorded statements by King George VI and President Franklin D. Roosevelt.

While covering the Allies' further advance across Europe, Bryan was wounded and captured by the Germans and spent six months in hospitals and in a prisoner of war camp in Szubin, Poland. He was freed by Soviet troops in January, 1945.

The Allies had gone to extreme measures to protect the location of the invasion including planting fake documents, fake troop placements, and fake announcements. Germany did all it could to try to find out just where the Allies would land. One tactic was to falsely claim the invasion had begun hoping to fool the Allies into revealing the real location. 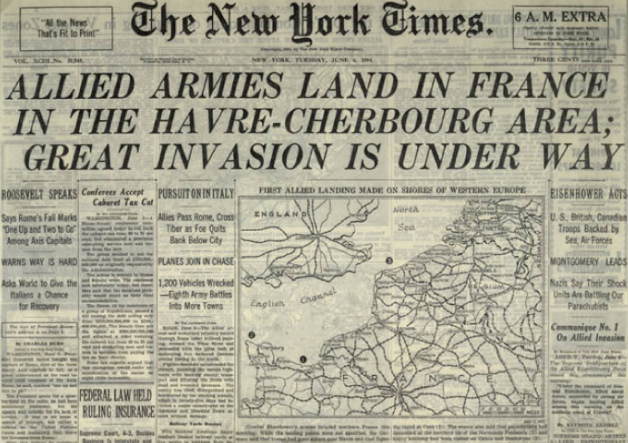 So it was no surprise that the news organizations were shy to jump on any announcement of a pending invasion. News reports included flash announcements which were deemed immediate and important information received; the other were bulletins which were also important but not deemed as immediate.

On June 3rd there had been a flash announcement that the invasion was under way but within minutes the announcement was withdrawn as the source, the Associated Press, killed the story as false. 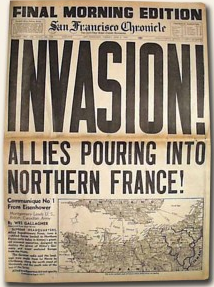 When the first announcements started coming in the early morning of June 6, there were cautions attached to the bulletins. NBC reportedly came on the air with announcements around 12:41 AM EST after waiting at least 3 minutes from the time the AP bulletin was received.

The music of Harry James and his Orchestra was broadcasting over WOR (Mutual) from the Hotel Astor in New York. Kitty Kallen had just begun singing ironically "In Times Like These" when her song was interrupted right after 12:45 AM for bulletin.  Listen Here. Ned Calmer with CBS broadcast the bulletin around 12:48 AM. CBS waited until a second source, the Independent News Service, also released a bulletin.

Later repeats of the bulletins appeared over both networks. Irwin Darlington with CBS broadcast the breaking news. Listen Here.   Over at NBC this bulletin was aired.  Listen Here. 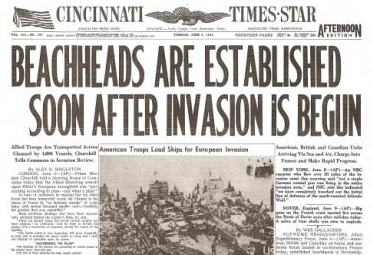 CBS reporter Darlington was very cautionary in his bulletin announcement reminding listeners of Winston Churchill's warnings of Allied feints and the expected invasion story from the Germans. He also carefully identifies where the information is coming from as well as the actual quotes. They also provide reports from the German DNB and German radio broadcasts.

NBC's bulletin was very formal and straight-forward with little warning that the information could be false. Later cautions came from the summary of news reports they broadcast later. (H/T: Radio Days)