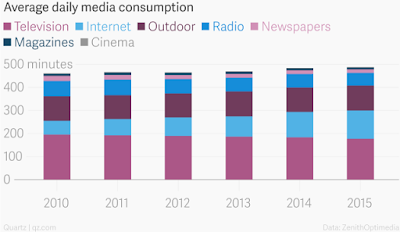 On average, people spend more than 490 minutes of their day with some sort of media, according to a new report by ZenithOptimedia.

Television remains dominant, accounting for three hours of daily consumption—an hour more than the internet, in second place. (The report measures media consumed in its traditional form—for example, broadcasts on television sets and newspapers in print. Watching videos on the web or reading a newspaper’s website counts as internet consumption.)

By 2017, we will find even more time in the day to take in media—half of our waking life is apparently not enough—with global average consumption set to rise to 506 minutes, according to ZenithOptimedia.
Posted 3:23:00 AM