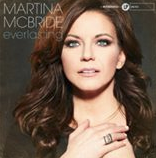 McBride said it's "really dangerous" to make that kind of blanket statement and called it a "self-fulfilling prophecy."

Hill told Country Aircheck Weekly that women are "just not the lettuce in our salad. The lettuce is Luke Bryan and Blake Shelton, Keith Urban and artists like that. The tomatoes of our salad are the females."  (See Original Posting: Click Here)


Following her appearance on "CBS This Morning," McBride continued the conversation on Facebook.

I want to thank CBS This Morning for having me on today. But there are a few things I forgot to say. Being on live tv...
Posted by Martina McBride on Tuesday, June 2, 2015