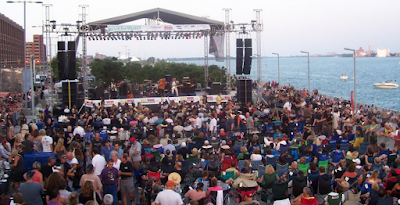 Celebrating a decade of classic rock on the Detroit riverfront, the General Motors Rockin’ on the Riverfront concert series returns this summer to strike a chord in the D. Kicking off on Friday, July 10.

The annual concert series will welcome rockers of all ages to the riverfront plaza, between the GM Ren Cen and Detroit River, to enjoy six consecutive Friday evenings of music from 8-10 p.m. Special this year in honor of the tenth anniversary, organizers have announced the addition of an encore performance featuring Eddie Money on Friday, Aug. 21.

“Ten years is a long time, and we really wanted this milestone year to be special,” said Claudia Killeen, General Motors Renaissance Center Development manager. “Rockin’ on the Riverfront would not be possible without the thousands of fans who come out each year to the support the shows, and adding another night of music to the schedule is our way of thanking ROR fans.”

Admission to the concerts is always free and no tickets are necessary. Viewing space is offered on a first-come, first-served basis.

The 2015 General Motors Rockin’ on the Riverfront concert series is sponsored in partnership with Detroit’s #1 for Classic Rock 94.7 WCSX-FM, the Detroit Marriott at the Renaissance Center, Andiamo Italia and Greektown Casino.
Posted 3:06:00 AM