After more than a decade of digital disruption across the entertainment & media (E&M) industry, the distinction between digital and traditional media is deemed irrelevant in the minds and wallets of consumers, according to PwC’s annual Global Entertainment and Media Outlook 2015-2019 – an in-depth five-year outlook for global consumer spending and advertising revenues directly related to entertainment and media content – released today. The E&M industry is now a multifaceted ecosystem – with new digital offerings creating a bigger, more diverse content universe and with digital accelerating delivery across platforms – whereby consumer choice is paramount. 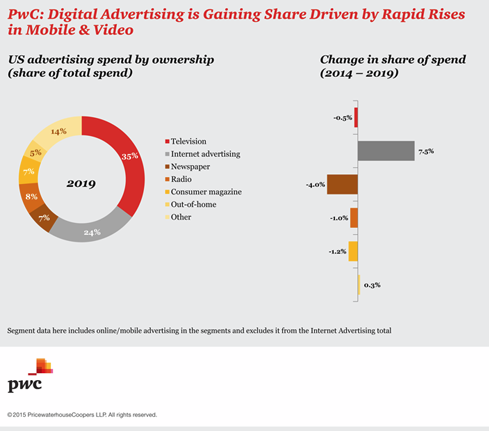 While global revenue from digital media is expected to generate stronger growth, non-digital media is still projected to be the significant contributor of global consumer revenues in 2019. A key takeaway of this multifaceted environment is the resilience – and in some cases resurgence – of some traditional media, including the shared, live experiences that consumers still love. In the U.S., spending on live music ticket sales (4.4. percent CAGR) and cinema box office (4 percent CAGR) is expected to outpace overall U.S. consumer spending at 2.9 percent by 2019. U.S. digital spending is expected to grow at 11.1 percent CAGR over the next five years and account for 46 percent of overall U.S. E&M spending growth, up from 34 percent in 2014. 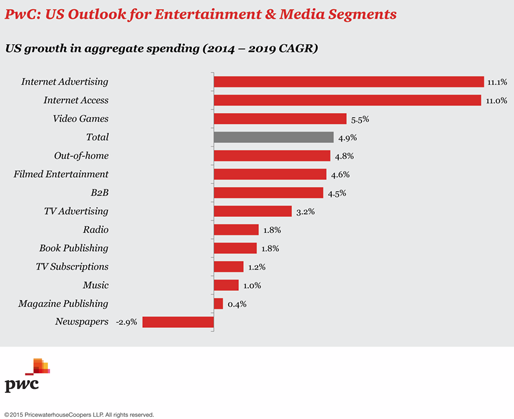 Notable U.S. tipping points:
According to Outlook, E&M companies should focus on three priorities to succeed: