In 1959…KLX-AM, Oakland, California changed its call letters to KEWB-AM. Now it is known as KNEW 960 AM.


In 1965... Bob Crane, popular morning personality on KNX 1070 AM in Los Angeles told his audience he’s leaving the show to star in a new TV series “Hogan’s Heroes.” Crane says he’s been 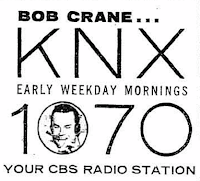 considering offers for years. Most recently, he co-starred on “The Donna Reed Show” while still doing mornings on KNX. He begins shooting for the new series in two weeks. He’ll be replaced by Pittsburgh’s Rege Cordic. Because of contractual obligations, Cordic won’t be able to debut until January.

Bob Crane came to KNX in 1956 from WICC in Bridgeport, CT. He got his job in Los Angeles, when someone at another station sent KNX a tape of Crane, to get him out of town (Crane had huge ratings at WICC).

In 1978...House Speaker Tip O’Neal announced that for the first time in history, the House would allow complete radio coverage of its proceedings. Radio and TV coverage until now has been limited to ceremonial occasions.


In 1986...Bruce Wayne KFI-in-the-sky traffic reporter was killed after his small plane was taking off in Orange County. Wayne was about to file his first traffic report of the day when the crash occurred. In two weeks, he would have celebrated his 25th anniversary on the job.


In 1986...Wally Clark announced he would resign his post as president/general manager of Gannett powerhouse KIIS-AM/FM on September to form his own consultancy. All outlets in the growing Gannett chain will be his first clients. Clark joined KIIS in 1982 when the station had a 2.2 share and charged $37.5 per spot. KIIS now commands $2.500 per spot and is a top billing radio station.

He was Nicknamed the "Mound of Sound" by Brent Musburger of CBS Sports, because of both his rich voice and his large size. The bearded and rotund Cody, who estimated his own weight at 325 pounds, vitalized the sports scene in Western Washington for more than 20 years. He was well known for his on-camera antics and his entertaining style of broadcasting. In the 1980s, KIRO TV ran a promotion called "Watch Wayne Disappear." The sportscaster was to lose 100 pounds over nine months and collect a $25,000 bonus. He was 25 pounds too heavy by deadline day.

Cody is best known for being the sports anchor on KIRO-Channel 7 TV and hosting KIRO 710 AM "Sportsline", a weeknight sports radio talk show that was the only one of its kind at the time in Seattle. He was also the original sideline reporter for the Seattle Seahawks radio network. Cody's other play-by-play experience in the Pacific Northwest included the Seattle SuperSonics (NBA) during the late 1970s thru the mid-1980s, Seattle Sounders of the North American Soccer League and University of Washington Huskies college football games. Earlier in his career, he also was the sideline reporter for the Seattle SuperSonics (NBA).
Posted 11:59:00 PM