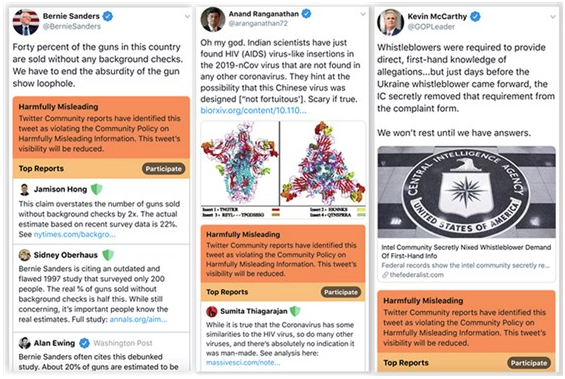 NBC News reports Twitter is experimenting with adding brightly colored labels directly beneath lies and misinformation posted by politicians and other public figures, according to a leaked demo of new features sent to NBC News.

Twitter confirmed that the leaked demo, which was accessible on a publicly available site, is one possible iteration of a new policy to target misinformation. The company does not have a date to roll out any new misinformation features.

In this version, disinformation or misleading information posted by public figures would be corrected directly beneath a tweet by fact-checkers and journalists who are verified on the platform and possibly by other users who would participate in a new "community reports" feature, which the demo claims is "like Wikipedia."

The demo features bright red and orange badges for tweets that are deemed "harmfully misleading" in nearly the same size as the tweet itself displayed prominently directly below the tweet that contains the harmful misinformation.

Examples of misinformation included a false tweet about whistleblowers by House Minority Leader Kevin McCarthy, R-Calif., a tweet about gun background checks by Sen. Bernie Sanders, I-Vt., and a tweet by an unverified account posting a doctored video of House Speaker Nancy Pelosi, D-Calif.
Posted 1:26:00 AM