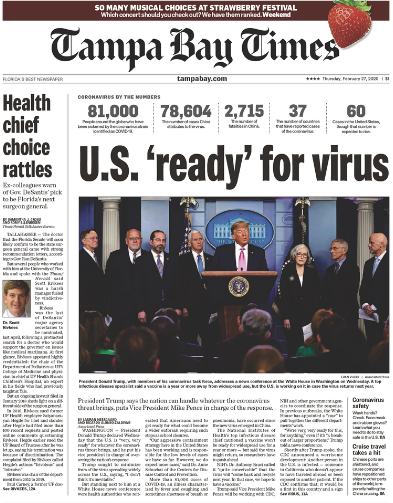 Citing a tough start to the year financially, the Tampa Bay Times announced Wednesday that all full-time staffers will temporarily have their pay cut by 10 percent.

The Times reports the pay cut goes into effect next week and ends on June 5, according to a note distributed to staff and signed by the executive team.

“This step is regrettable but necessary because revenues are falling short, a little in circulation and more seriously in advertising,” the note to staff said. “While we anticipated declines in print advertising, they are deeper than we expected, primarily in display advertising for some large accounts. Our sales teams are working diligently to preserve that business while finding new customers. But the growth of new accounts has not made up for the losses.”

Staffers affected by the pay cut will be given an extra five days of paid time off.

The executive team said it is reviewing all expenses and “additional reductions in staffing are likely.”
Posted 11:35:00 AM