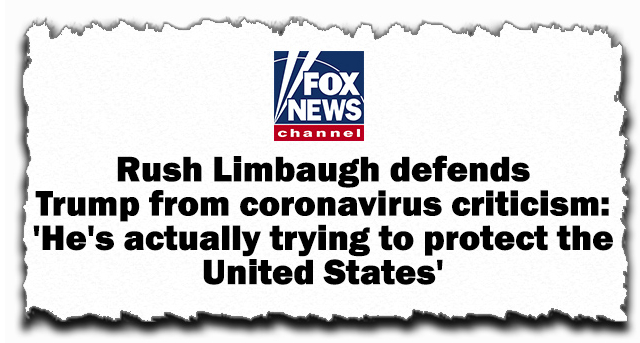 As fears grow about the spread of the coronavirus within the United States, right-wing media figures are going after a top CDC official, The Inquirer reports.

For the past 25 years, Dr. Nancy Messonnier has worked for the Centers for Disease Control and Prevention, where she has taken a leading role in warning the public about the potential spread of the coronavirus. On Tuesday, Messonnier, a Philadelphia native and University of Pennsylvania graduate, warned that an outbreak with the United States appears inevitable.

“The disruption to everyday life might be severe," she warned.

But some conservative media figures aligned with President Donald Trump — including popular radio host and Presidential Medal of Freedom recipient Rush Limbaugh — want listeners and readers to ignore Messonnier’s extensive background and knowledge of infectious diseases in favor of a baseless conspiracy theory that she is secretly working to harm Trump and his administration.

Their evidence? Her brother happens to be Rod Rosenstein, Trump’s former deputy attorney general who was responsible for appointing Robert Mueller as special counsel to investigate Russia’s interference in the 2016 presidential election.

On his nationally syndicated radio show Wednesday, Limbaugh took issue with Messonnier for warning about the likely spread of coronavirus within the United States, suggesting her real goal was to create panic and tank the stock market, thereby hurting Trump’s chances of being reelected:


Dr. Nancy Messonnier of the Centers for Disease Control — which today warned it could be bad, it might be bad, don’t go to school and don’t go to work, stay home and teleconference — is the sister of the former deputy attorney general, Rod Rosenstein. Well... do what you want with it. It may mean nothing. Who knows? It’s just in that town, I’m telling you, everything is incestuous. Most of that town is establishment oriented or rooted, which means they despise Trump.

That was a setup! Messonnier is part of the setup. Do not doubt me, folks. They are still arrayed against Trump, and they’re doing everything they can to try to trip him up, and he was ready for it.

The CDC did not immediately respond to a request for comment.
Posted 1:39:00 AM