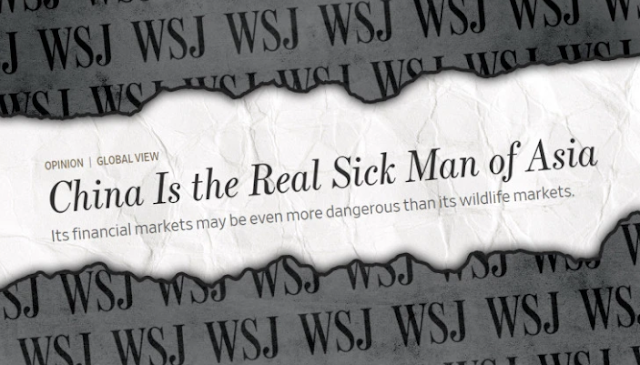 The NY Times reports more than four dozen journalists at The Wall Street Journal challenged their bosses and criticized the newspaper’s opinion side in a letter that was sent to top executives on Thursday, the day after China announced that it would expel three Journal staff members in retaliation for a headline that offended the country’s leaders.

In all, 53 reporters and editors signed the letter. They criticized the newspaper’s response to the fallout from the headline, “China Is the Real Sick Man of Asia,” that went with a Feb. 3 opinion essay by Walter Russell Mead, a Journal columnist, on economic repercussions of the coronavirus outbreak.

The letter, which was reviewed by The New York Times, urged the newspaper’s leaders “to consider correcting the headline and apologizing to our readers, sources, colleagues and anyone else who was offended by it.”

The Chinese government uses visas for foreign journalists as leverage, doling out and retracting credentials as a way to influence news outlets. Foreign news media organizations face pressure to steer clear of sensitive topics like the wealth and political pull of the families of the country’s leaders.

Like many other international news organizations, The Times among them, The Journal is blocked online in China, and the “Sick Man” headline was brought to wide attention there by state-controlled media, amid nationwide concern over an epidemic that has infected over 76,000 people in China and killed more than 2,400.

China was sometimes described as the “sick man of Asia” at the end of the 1800s, in “the depths of what we now call China’s ‘Century of Humiliation,’” said Stephen R. Platt, a historian of modern China at the University of Massachusetts. The empire had then lost a series of wars and had feared being divvied up by imperial powers.
Posted 1:16:00 AM