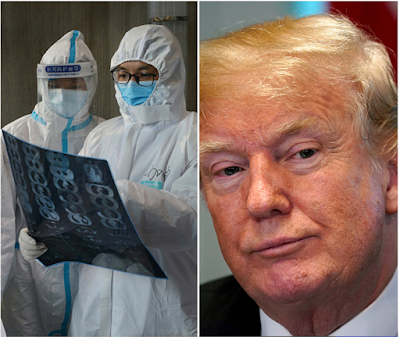 President Trump and members of his administration mobilized on Friday to confront the threat of the coronavirus — not just the outbreak, but the news media and the Democrats they accused of exaggerating its danger, reports The NYTimes.

While stock markets tumbled, companies searched for new supply chains and health officials scrambled to prevent a spread of the virus, Trump and his aides, congressional allies and backers in the conservative media sought to blame the messenger and the political opposition in the latest polarizing moment in the nation’s capital.

Trump said that news outlets like CNN were “doing everything they can to instill fear in people,” while some Democrats were “trying to gain political favor by saying a lot of untruths.” His acting White House chief of staff, Mick Mulvaney, went even further, telling conservative activists that journalists were hyping the coronavirus because “they think this will bring down the president; that’s what this is all about.”

At a campaign rally on Friday evening in South Carolina, the president denounced Democrats, describing the concerns they have expressed about the virus as “their new hoax” after the Russia investigation and then impeachment. “Now the Democrats are politicizing the coronavirus,” he said. “We did one of the great jobs. You say, ‘How’s President Trump doing?’ They go, ‘Oh, not good, not good.’ They have no clue. They don’t have any clue. They cannot even count the votes in Iowa.”

“It looks like the coronavirus is being weaponized as yet another element to bring down Donald Trump,” Rush Limbaugh, the conservative radio host, said on his syndicated program this week, dismissing the disease as a Democratic talking point, The NYTimes reports.

Viewers of the Fox News talk show “Fox & Friends” on Friday heard the co-host Ainsley Earhardt introduce a segment by announcing: “Let’s talk about the Democrats and the media with this coronavirus, and they’re making it political.”

Her guest was Pete Hegseth, a “Fox & Friends Weekend” co-host and an on-air Trump cheerleader who doubles as an informal confidant of the president.

Earhardt and her co-hosts, Steve Doocy and Brian Kilmeade, nodded along. Their show is the highest-rated morning program on cable news.

Greg Gutfeld on Fox News Channel's 'The Five' had this take on the media: