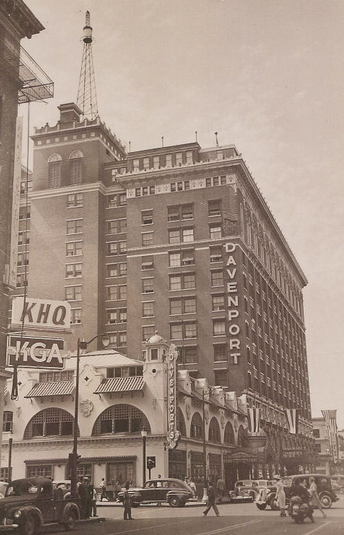 ➦In 1922...KHQ-AM, Spokane, Washington, signed-on in Seattle. Louis Wasmer founded the pioneer radio station as part of a motorcyle shop he owned. He later re-established the station in Spokane in 1925.

The picture to the right is a view of the KHQ's tower on top of the Davenport Building probably from the 1940's based on the age of the automobiles pictured. KHQ was not using the tower at this time.

The KHQ and KGA signs are attached to the Radio Central Building which was being used by those station at that time.

In 1949, RKO-General acquired KFRC. Like most radio stations during the 1950s, KFRC lost ratings and share to television. In February 1966, KFRC flipped to a Top 40 rock and roll music format, and quickly became the dominant station in the region with that format through the 1970s, featuring the tight, carefully programmed sound developed by RKO General's national program director, Bill Drake, formerly of cross-town rival KYA, and program directors Tom Rounds and, later, Les Turpin.

During the Drake era, KFRC was responsible for two memorable concerts.

The station presented several prominent acts at the “The Beach Boys Summer Spectacular” at the Cow Palace in San Francisco in June 1966. On June 10 and 11, 1967, KFRC organized and hosted the Fantasy Fair and Magic Mountain Music Festival at the summit of Mount Tamalpais in Marin County, California. Occurring one week before the more famous Monterey Pop Festival, the well-attended event is regarded as the first rock festival in history.

For several years, KFRC had extended local newscasts on its AM station, under the leadership of news director Bob Safford; however, management decided to curtail news coverage, so Safford and other news staff moved to other news broadcast departments in San Francisco, including KCBS Radio and KGO-TV.

➦In 1969...WABC 95.5 FM starts the  “Love” format.  The station originally went on the air on May 4, 1948 under the call sign WJZ-FM  and in March 1953, the station's call letters were changed to WABC-FM following the merger of the American Broadcasting Company with United Paramount Theatres.

As most FM stations did during the medium's formative years, 95.5 FM simulcast the programming of its AM sister station.

In the early 1960s, however, WABC-FM began to program itself separately from 77 WABC-AM. During the 1962–63 New York City newspaper strike, the station carried an news format for 17 hours daily. Two-and-a-half years before WINS launched its own around-the-clock, all-news format in April 1965, it was the first attempt at an all-news format in the New York market.

At the start of 1968, ABC split its radio network into four distinct components targeting specific demographics, one of which was dedicated to FM radio. The following year, WABC-FM and its sister stations: KABC-FM in Los Angeles, WLS-FM in Chicago, KGO-FM in San Francisco, WXYZ-FM in Detroit, KQV-FM in Pittsburg and newly acquired KXYZ-FM in Houston–began carrying an automated, youth-oriented, progressive rock format known as Love.  Click Here for aircheck. Click Here for Part Two.

Anderson got his start in show business as a teenager on the vaudeville circuit. In the early 1930s, he transitioned into films and radio. In 1937, he began his most famous role of Rochester van Jones, usually known simply as "Rochester", the valet of Jack Benny, on his NBC radio show The Jack Benny Program. Anderson became the first Black American to have a regular role on a nationwide radio program. When the series moved to CBS television in 1950, Anderson continued in the role until the series' end in 1965. 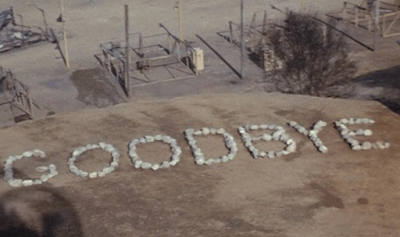 ➦In 1983...the CBS-TV series M*A*S*H ended after 11 seasons.  M*A*S*H (an acronym for Mobile Army Surgical Hospital) is an American war comedy-drama television series that started aired on CBS in 1972. 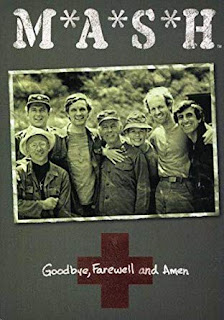 It was developed by Larry Gelbart, adapted from the 1970 feature film M*A*S*H, which, in turn, was based on Richard Hooker's 1968 novel MASH: A Novel About Three Army Doctors. The series, which was produced with 20th Century Fox Television for CBS, follows a team of doctors and support staff stationed at the "4077th Mobile Army Surgical Hospital" in Uijeongbu, South Korea, during the Korean War (1950–53).

The television series was one of the highest-rated shows in U.S. television history.

"Goodbye, Farewell and Amen" broke the record for the highest percentage of homes with television sets to watch a television series.

➦In 2003...FCC aproved the sale of WEVD 1050 AM to ABC.   The 1050 frequency has a long history prior to this format. Starting in the 1920s as WHN, it played a diversified format. It was renamed WMGM in the late 1940s, continuing the same format until a switch to Top40 in the late 1950s and early 1960s. As WHN again, it played adult standards in the 1960s and country music in the 1970s and 1980s (the format it was best known for). In the late 1980s as WFAN it was the original frequency for the very successful first of its kind all-sports station. Then began a truly convoluted set of ownership, call letter, and format changes from the Spanish language WUKQ to WEVD, a low-rated brokered station in the 1990s, to today's incarnation as WEPN airing ESPN DePortes.

Carter, who billed himself as the "semi-legendary almost king of rock 'n' roll," had been suffering from congestive heart disease and diabetes.

Carter, who was inducted into the Texas Radio Hall of Fame in 2002, began his career in Lufkin. He had been working in radio 43 years.

He got his nickname early in his career for spinning records "real records, like spinning hubcaps."

Carter had worked at several Texas stations and had been news director at WWUN in Jackson, Miss., and the Texas State Network.

He also taught broadcast journalism classes at Texas Christian University and Texas Wesleyan, both in Fort Worth, and was a teacher and coach at North Dallas High School for seven years.

➦In 2006...CBS Radio sued Howard Stern and Sirius Satellite Radio Inc. with a $218-million lawsuit that alleged Stern misused the company's airtime in a scheme to boost the payment he received when he moved to Sirius in January. CBS contended that while it employed Stern, the host spent more than a year hyping his upcoming switch to Sirius and, as a result, improperly enriched himself, "pocketing over $200 million for his personal benefit" by driving up Sirius' subscriber numbers. 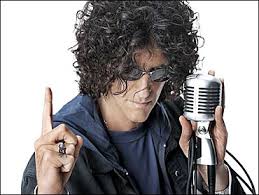 The subscription increase allowed Stern to trigger an early grant of more than 34 million shares of Sirius stock, valued at about $220 million, the suit alleged. That compensation was disclosed by Sirius this year after Stern had signed off CBS' airwaves.

Stern had a financial incentive "to do all that he could to help Sirius reach the subscriber targets by the end of 2005 so that he could receive his Sirius stock payment as soon as possible while Sirius' stock was extremely valuable," according to the lawsuit filed in New York Supreme Court.

Also named in the breach-of-contract and fraud suit were Stern's production company and his agent, Don Buchwald. In addition to the $218 million in restitution, CBS was seeking unspecified punitive damages.

Stern began broadcasting with Sirius in January under a five-year contract worth more than $600 million. The satellite broadcaster hoped that millions of Stern's fans will subscribe to its service, enticed by ribald material that conventional broadcasters were reluctant to air because of federal decency standards. 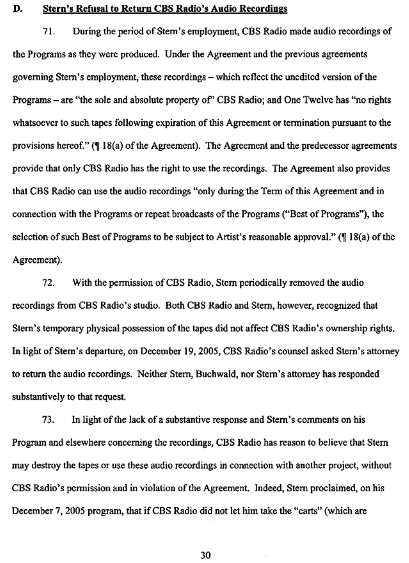 "There were no secret negotiations; I spoke about it on the radio," Stern said at a hastily called news conference in New York after rumors of the suit appeared in the New York Post. CBS Corp. Chief Executive Leslie Moonves "has had it in for me for a long time."

Stern's move to Sirius attracted more than 1 million new subscribers, boosting their listeners to 3.3 million. But costs associated with Stern and other content deals have proved high, and the company's losses grew to $311.4 million in the quarter ended Dec. 31.

He broadcast News and Comment on weekday mornings and mid-days and at noon on Saturdays, as well as his famous The Rest of the Story segments. From 1952 through 2008, his programs reached as many as 24 million people a week. Paul Harvey News was carried on 1,200 radio stations, 400 American Forces Network stations, and 300 newspapers

Harvey was born in Tulsa, Oklahoma. The son of a policeman killed in 1921, Harvey made radio receivers as a young boy. He attended Tulsa Central High School where a teacher, Isabelle Ronan, was "impressed by his voice." On her recommendation, he started working at KVOO in Tulsa in 1933, when he was 14. His first job was helping clean up. Eventually he was allowed to fill in on the air, reading commercials and the news.

Harvey then moved to Chicago, where in June 1944, he began broadcasting from the ABC affiliate WENR. In 1945, he began hosting the postwar employment program Jobs for G.I. Joe on WENR. Harvey added The Rest of the Story as a tagline to in-depth feature stories in 1946.

On April 1, 1951, the ABC Radio Network debuted Paul Harvey News and Comment "Commentary and analysis of Paul Harvey each weekday at 12 Noon". Paul Harvey was also heard originally on Sundays; the first Sunday program was Harvey's introduction. Later, the Sunday program would move to Saturdays. The program continued until his death.

➦In 2015…Former Toronto personality Pete Nordheimer  died at the age of 93. He did a split shift on CHUM's original lineup, not unusual for radio in those days, with shows in afternoon drive and late night. Nordheimer was the only original CHUM jock still on the station's lineup into the 1960s. He was doing 1-4 p.m. when he was replaced by Bob McAdorey in August 1961.  Nordheimer was the last of the living original CHUM jocks.
Posted 12:59:00 AM