eMarketer: Teens Are All About Staying Connected 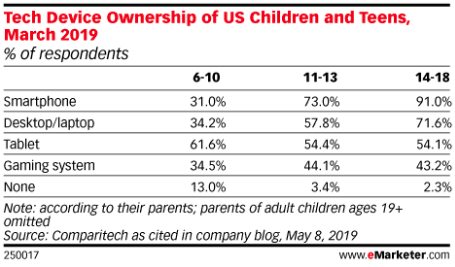 Teens are all about staying connected, and smartphones make it easy—especially as the age at which children and teens get these devices continues to trend downward.

Phones are the first sense of freedom a teen likely enjoys, so it’s no surprise that they rank the device as their favorite form of technology. According to a January 2019 report by marketing agency Fuse, nearly half (48%) of teens surveyed cited mobile phones as their favorite technology, topping gaming (27%) and social media (20%).

Knowing nothing other than constant connectivity, teens—true digital natives—are perhaps less impressionable than older generations when it comes to new gadgets or features.

Low wearable penetration among teens illustrates their less-than-impressed mindset. eMarketer estimates that just 14.7% of those ages 12 to 17 will be smart wearable users in 2020, compared with 36.0% of those 18 to 24 and 38.2% of those 25 to 34. Lower penetration is also likely influenced by parental reluctance to buy more than one pricey device for their teens. 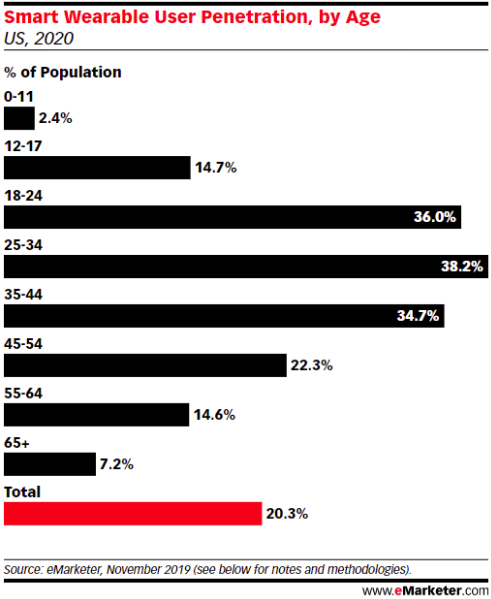 Almost all US teens are internet users; eMarketer forecasts that 97.4% of 12- to 17-year-olds will use the internet at least once a month in 2020. But that doesn’t mean that all their time is spent online (at least not according to teens themselves, who may not be the most reliable judges when it comes to how much time they really spend online).

In YouGov polling from September 2019, more than half of respondents ages 13 to 17 self-reported going online for less than 2 hours on a typical day, while roughly three in 10 reported spending 3 or more hours. 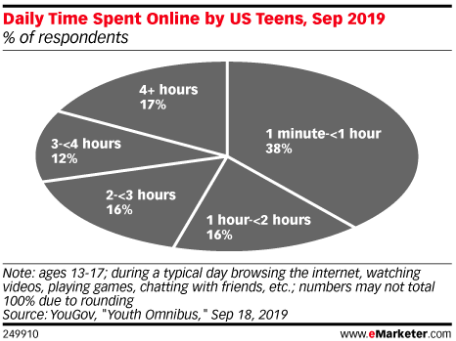 And contrary to what older folks may think, teens aren’t just spending time "Snapchatting" friends or scrolling through Instagram. In polling for a 2019 report by the Girl Scout Research Institute, 68% of girls and 59% of boys ages 11 to 17 endorsed the statement, “I have discovered a new talent or interest [by exploring online].” And 60% of girls and 51% of boys agreed that they are “more connected to social issues and causes [because of the internet].”

YouTube is a mainstay of teens’ digital activities. March 2019 polling by the National Research Group (NRG) identified 92% of 13- to 17-year-olds as weekly viewers. And in the fall 2019 edition of Piper Jaffray's twice-yearly “Taking Stock with Teens” polling, the average share of time teens spent with YouTube (37%) edged past that of Netflix (35%) for the first time since at least fall 2017.
Posted 2:41:00 AM