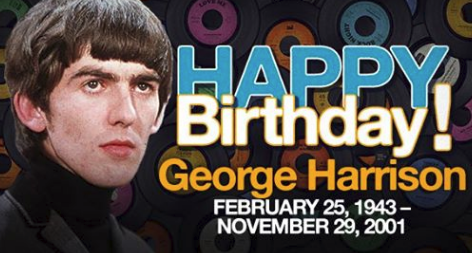 ➦In 1943...George Harrison born (Died 29 November 2001 from cancer at age 58).  He was an English musician, singer-songwriter, music and film producer who achieved international fame as the lead guitarist of The Beatles.

Often referred to as "the quiet Beatle", Harrison embraced Indian culture and helped broaden the scope of popular music through his incorporation of Indian instrumentation and Hindu-aligned spirituality in the Beatles' work.

Although the majority of the band's songs were written by John Lennon and Paul McCartney, most Beatles albums from 1965 onwards contained at least two Harrison compositions. His songs for the group included "Taxman", "Within You Without You", "While My Guitar Gently Weeps", "Here Comes the Sun" and "Something". 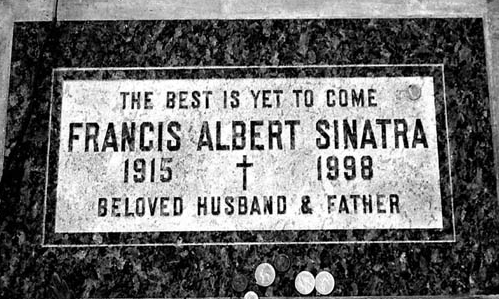 ➦In 1995... at a private party for 1,200 invited guests on the closing night of the Sinatra Desert Classic golf tournament in Palm Springs, Frank Sinatra sang before a live audience for the very last time, at Marriott’s Desert Springs Resort. His closing song was ‘The Best is Yet to Come.’  He died on May 14, 1998.

➦In 2004...The controversy surrounding the Super Bowl XXXVIII halftime show (Nipple-Gate), aired live on February 1, 2004 and led to the government's crackdown on indecency in radio and television following a surge in audience complaints.

The situation prompted tighter control over content by station managers which made Stern feel "dead" creatively.

On this date, Clear Channel dropped The Howard Stern Show from its station after it and Viacom were fined for content the FCC deemed indecent.

The situation culminated on October 6, 2004, when Stern announced the signing of a five-year deal with Sirius Satellite Radio, a subscription-based satellite radio service exempt from the FCC's broadcast regulations, starting in 2006. It is a move that has been regarded as the start of "a new era of radio." Stern's final live show on terrestrial airwaves aired on December 16, 2005. 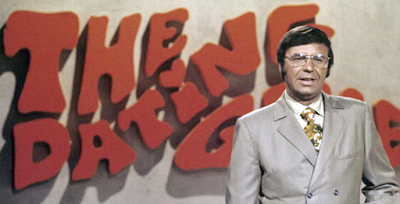 He was an American game show host and disc jockey. He was known to listeners in the San Francisco and Los Angeles radio markets with stints at several stations in both markets, racking up over 45 years on the air. Lange was also known to television viewers as the host of several game shows, including The Dating Game.

Lange began his radio broadcasting career in the Twin Cities after winning an audition as a teenager.

After graduating from the University of Minnesota and serving in the Marines, Lange moved to San Francisco. After making his Bay Area broadcast debut as "The All-Night Mayor" on KGO, he moved to afternoons on KSFO in 1960. 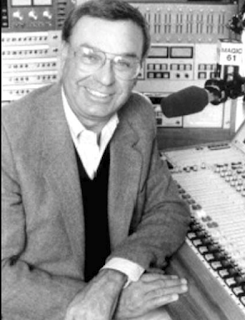 Lange's network television career began in San Francisco with The Ford Show in 1962, where he was the announcer for, and sidekick to, host Tennessee Ernie Ford. Three years later he would sign on to host The Dating Game (1965–1980). While still on-air at KSFO, he commuted to Los Angeles to tape the TV program.

Lange was introduced to Los Angeles local audiences on KMPC in 1970, in order to limit his commute while taping The Dating Game. He returned to Gene Autry/Golden West-owned KSFO by 1971 and remained there until the station was sold in 1983. He then returned to KMPC, where he did mornings and afternoons (at different times) until the end of the decade.

In the early 1990s, Lange returned to full-time radio in the Bay Area. During that period he initially worked afternoons on 610/KFRC. He eventually accepted an offer to broadcast weekday mornings on "Magic 61," by then owned by real estate magnate Peter Bedford (Bedford Broadcasting). Magic 61 was formatted as "American pop standards" (Frank Sinatra, Tony Bennett, Johnny Mathis, Harry Connick, Jr., Peggy Lee, Ella Fitzgerald, et al.). After the sale of KFRC AM and FM (99.7) FM (the new owners decided to simulcast the FM "oldies" format on 610 AM), Jim and the show decamped for a run on KKSJ, San Jose.