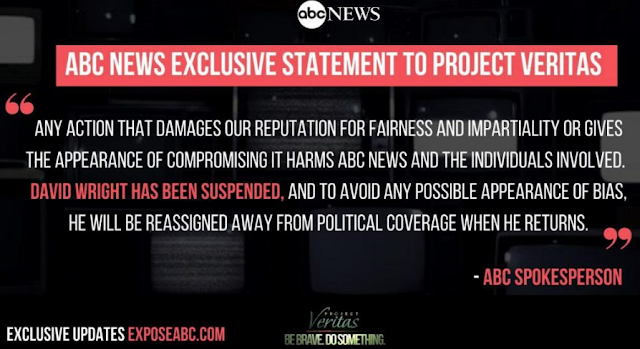 ABC News suspended one of its veteran correspondents late Tuesday for unguarded remarks he made in a video by operatives of Project Veritas, the conservative group that records “undercover” footage of mainstream journalists to bolster its accusations of media bias.

The choppy, poorly shot video, released Wednesday morning by Project Veritas, captured Wright on what appeared to be a hidden camera, seeming to complain in general terms about political coverage.

“I don’t think we’re terribly interested in voters,” he said, echoing gripes about the superficiality of some aspects of White House and campaign coverage that have been raised by journalists for decades. Also: “Commercial imperative is incompatible with news.”

At one point he says: “We don’t hold him to account. We also don’t give him credit for what things he does do.” In subtitles, Project Veritas indicated that “him” stood for President Trump. He refers to Trump at another point as “the f-----g president.”

But ABC probably was also alarmed at Wright’s criticism of ABC News, which is owned by the Disney Co. At another point, he raises another longstanding critique of ABC News — that it blends news with promotion of Disney-owned movies and TV programs.

“Like now you can’t watch ‘Good Morning America’ without there being a Disney princess or a Marvel Avenger appearing,” he says. “It’s all self-promotional.”

The Hill reports Project Veritas, which routinely releases undercover videos meant to embarrass members of the media, politicians or liberal groups, released a recording of Wright criticizing his network. Its videos have been criticized for being selectively edited.

He also said that ABC's "bosses don’t see an upside in doing the job we’re supposed to do, which is to speak truth to power and hold people accountable.”
Posted 1:35:00 PM