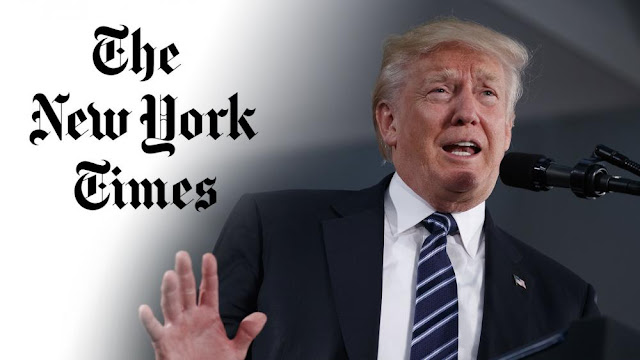 President Trump Wednesday escalated his war against the press by suing New York Times Co., accusing it of knowingly publishing false and defamatory statements claiming his 2016 election campaign had an agreement with Russia to exchange positive foreign policy for help defeating his rival, Hillary Clinton.

The Boston Globe reports the suit, filed in New York state court on Wednesday, alleges that the Times published a defamatory opinion piece in March 2019 that claimed the campaign had an “overarching deal” with Russian President Vladimir Putin’s oligarchy to swap assistance in the race against Clinton for relief from economic sanctions imposed by Barack Obama’s administration. The campaign says the article refers to the meetings between Russian lawyer Natalia Veselnitskaya and Trump officials in 2016, which it says ended in no agreement.

“The Times was well aware when it published these statements that they were not true,” the campaign argues in the suit. “The Times’ own previous reporting had confirmed the falsity of these statements.”

The Times published its stories anyway, because of its “extreme bias against and animosity toward the campaign, and the Times’ exuberance to improperly influence the presidential election in November 2020,” according to the lawsuit.