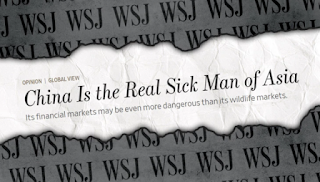 The NY Times reports any action could be partly aimed at limiting Chinese intelligence collection efforts in the United States by expelling journalists who have contact with intelligence agencies, people familiar with the discussions said.

“The United States condemns Beijing’s expulsion of three Wall Street Journal foreign correspondents,” said John Ullyot, a spokesman for the White House’s National Security Council. “This expulsion is yet another attempt to control the press, and prevent the world’s readers as well as investors from reading important stories about China.”

“The United States is considering a range of responses to this egregious act,” he added.

Retaliation by the United States could lead to escalating cycles of retribution involving the two governments, private and state-run news organizations and intelligence agencies.

The Chinese Foreign Ministry announced on Wednesday that it was expelling the reporters in retaliation for a headline on a Feb. 3 Wall Street Journal opinion column: “China Is the Real Sick Man of Asia.” The column criticized China’s handling of the coronavirus outbreak.

Historians say a Chinese reformer, Liang Qichao, coined the phrase “the sick man of Asia” in Chinese in the late 19th century to describe the Qing dynasty, but Chinese officials argued after the column’s publication that it was an insult to the Chinese people and demanded that The Journal apologize.
Posted 1:11:00 AM