The Wall Street Journal reports the tech giant earned $16.9 billion in revenue, up 28% from a year ago. The company posted $2.6 billion in profit, or $0.91 a share, reflecting a one-time $2 billion charge as part of its $5 billion settlement with the Federal Trade Commission announced earlier on Wednesday, and an accounting change regarding tax deductions for stock-based compensation. Without those two charges, the company would have earned $1.99 a share, beating analysts’ expectations of $1.88. 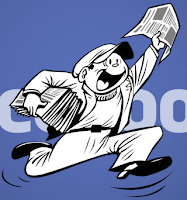 Yet even as Facebook resolved one major federal probe, it disclosed the existence of another: an FTC antitrust review that the company said began in June.

Facebook’s results show the duality that currently defines the company: It is a punching bag for critics, who pummel it for repeated privacy missteps and misinformation on its platforms, but a darling of investors, who prize the earning power of its targeted advertising.

The company’s top executives said they believe they can continue to grow the business even while investing further in security and privacy. “This quarter shows once again we can do both,” Chief Operating Officer Sheryl Sandberg said on an earnings call.

The tech giant’s stock has risen 56% since the beginning of the year, despite a pile of regulatory and legal challenges and a skeptical reception for its plans to develop a global cryptocurrency called Libra. Facebook shares climbed more than 3% in after-hours trading Wednesday before dropping slightly.

The FTC settlement puts new guardrails around the company’s management and how it approaches privacy but doesn’t severely curtail Facebook’s data-collection or ability to sell ads based on it. The pact keeps Mr. Zuckerberg’s power over the company largely intact, while requiring the board to keep closer watch on privacy matters.
Posted 7:15:00 AM