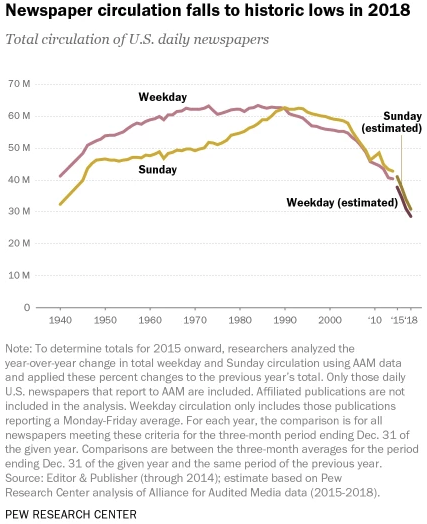 Total daily newspaper circulation (print and digital combined) was an estimated 28.6 million for weekday and 30.8 million for Sunday in 2018. Those numbers were down 8% and 9%, respectively, from the previous year, according to the Pew Research Center’s analysis of Alliance for Audited Media data. Both figures are now below their lowest recorded levels, though weekday circulation first passed this threshold in 2013.

Digital circulation for daily newspapers is harder to track. It did rise in 2018, though not enough to fully reverse the overall decline in circulation.

Revenue from circulation was steady in 2018, but ad revenue for newspapers fell 13%, according to an analysis of Securities and Exchange Commission filings. Though some national publications have seen growth in revenue and in digital subscriptions over the past few years, the newspaper sector overall continues to face challenges.
Posted 1:42:00 AM