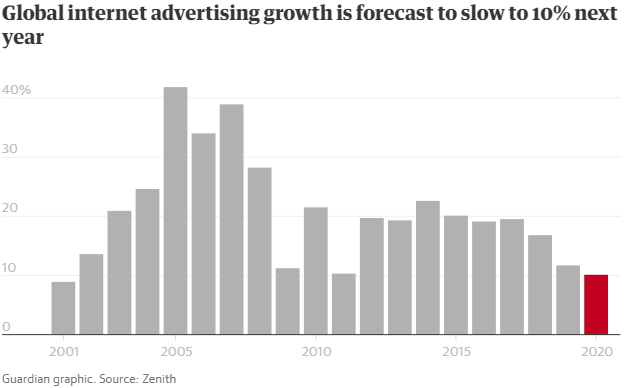 The internet is about to lose its mantle as the fastest-growing sector of the global advertising market for the first time in two decades, as brands seeking risk-free space to spend their ad budgets turn to traditional media such as cinema, billboards and poster sites, reports The Guardian.

Next year the global internet advertising market, which is dominated by Google and Facebook, will surrender its position as the fastest-growing ad medium for the first time since the early days of the dotcom boom and bust at the turn of the century.

Internet advertising is forecast to grow by 10% globally next year, the lowest level since 2001, according to research by the global media agency group Zenith. The shrinking growth rate means that cinema advertising, which is forecast to surge more than 12% next year, will become the fastest-growing ad medium.

Major companies have expressed their concerns over digital scandals – such as Cambridge Analytica, “fake news” and ads appearing next to inappropriate YouTube videos such as extremist material – putting pressure on internet platforms. 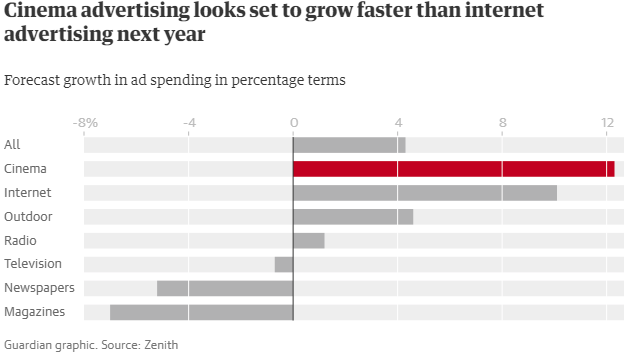 The movie industry is experiencing a golden age, with UK attendance last year hitting its highest level since 1970 and global box office records being smashed, and advertisers are looking to cash in.

Investment in technology, from the special effects used in blockbuster movies to the plush experience of cinemas sporting leather reclining seats, sofas and restaurant menus, has fueled a renaissance despite the proliferation of streaming services such as Netflix.

The outdoor advertising sector – which includes billboards, the sides of buses and railway stations – is also expected to grow at a healthy 5% globally in 2020, bucking a downturn in ad spending on other media including newspapers and TV.
Posted 5:13:00 AM