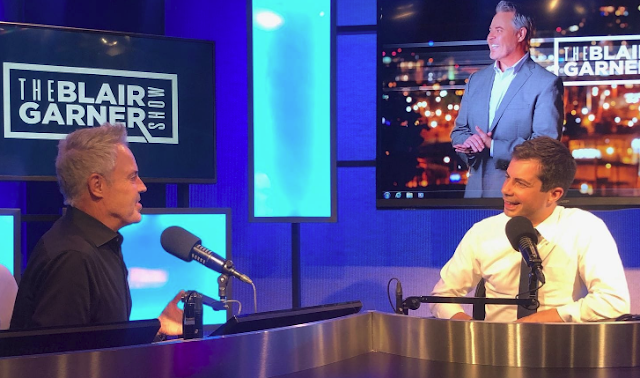 Longtime country radio host Blair Garner knows that listeners tune into his show for the music and celebrity guests, so after he booked an interview with Democratic presidential candidate Pete Buttigieg last week, he sent a letter in advance to his affiliate stations, reports The Washington Post.

“It is not, in any way shape or form, my intention for our show to become political,” wrote Garner, who was surprised when campaign staff reached out to him with an interview request while Buttigieg was in Nashville for a fundraiser. “But because someone clearly saw the value of our listeners, I felt secure in affording him this opportunity.”

The overnight Blair Garner Show is syndicated by Westwood One, a division of Cumulus Media. The show airs on over 150 affiliates nationwide.

Garner, who has worked in country radio for three decades, was well aware that politics is a sensitive issue for many listeners — particularly in the country music industry, where the strategy is typically to stay as apolitical as possible. He further wrote that Buttigieg would be two short segments in the first hour of the show and that the full audio would be online. And if stations preferred not to air any of it, his producers would provide alternate programming for those breaks.

However, those precautions were soon moot. A couple days after the South Bend, Ind., mayor appeared in the studio for a wide-ranging interview, Garner heard from his bosses at his parent company, Cumulus Media: The segments were being cut completely from his show. They granted him permission to post the full interview on his SoundCloud account, but it was not allowed on the radio.

In a statement, a representative for Cumulus Media said the company decided not to air the interview because it is a broadcaster subject to the FCC’s “equal time rule,” where stations and networks have to offer airtime to all candidates.

"Cumulus Nashville's programming managers made the decision not to air Blair Garner's pre-recorded interview with Mayor Pete Buttigieg because of the large number of political candidates currently in this race,” the statement read. “The decision was made by local programming management based solely on concerns related to the application of the FCC’s Equal Time Rule. The effects of the FCC’s Equal Time Rule are widely understood and considered whenever these types of issues arise.”


I'm not a political guy. My radio show isn't political, nor does it aspire to be. I'm just the host of a syndicated Country music program who loves his country - both the amazing land in which we live, and the outstanding music from today's Country artists. The phrase, "I love my Country" is one that I state proudly and without reservation. I mean it to my core. I was stunned when we were contacted by Mayor Pete's team requesting an interview. Absolutely stunned. Since Country music tends to lean in a conservative direction, I was surprised. But more than surprised, I was EXTREMELY flattered. One of the few truly viable candidates in the race raised his hand and asked for a place at the table. I was willing to give him that seat. I would have also given a seat to any other viable candidate, from both sides. The only condition? They must also value and appreciate our listeners, and never treat them as pawns. Nobody else reached out. I assume nobody else even thought to reach out. The interview is twenty minutes in total length. I was proud of it. But in the end, I was told that I couldn't air it. Again, I would have GLADLY welcomed any other viable candidates to be a guest, especially President Trump. To my thinking, the best way to a reasoned, thoughtful position on any topic, is to hear from both sides. Regardless, the interview was killed. I did, however, ask for permission to post the interview on my own personal SoundCloud account. I was given that blessing, and I am happy to share it with you there. (Link in Bio) #buttigieg #petebuttigieg #mayorpete #pete #peteforamerica #presidentpete #chastenbuttigieg #warren #democraticprimary #firstgent #biden #peteforprez #bootedgeedge #harris #election #beto #iowa #joe #sanders #bernie #runningforpresident #nextgeneration #policies #democracy #hope #youthvote #democrats #partywithpete #mayorpetebuttigieg
A post shared by blairgarner (@blairgarner) on Jul 19, 2019 at 12:30pm PDT