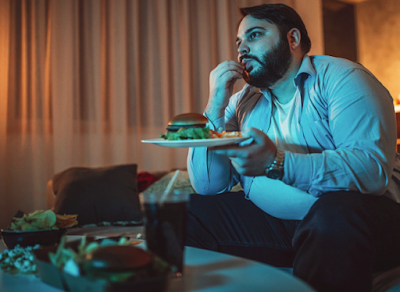 A new survey of 2,000 adults has found that a whopping 88% are so-called “zombie eaters” who stare at some type of screen while eating.

The OnePoll survey, commissioned by Pretzel Crisps, aimed to shed some light on American eating habits. The results indicate that Americans are so glued to their screens, they rarely stop staring even to eat. In fact, the average U.S. eater will stare at their phone twice over the course of any given meal, and will only have five screen-free meals per week.

It’s clear from the survey’s findings that “zombie eating” is an almost universal practice in today’s culture; 91% of respondents reported watching television while eating a meal or snack, and 49% say they watch TV while eating on a regular basis.

So, what is keeping Americans so busy that they can’t unglue themselves from a screen to eat? According to the survey, the number one reason (50%) Americans stay on their smartphones while eating is to read or send emails. Additionally, 48% stay on their phones to check out social media, 37% watch YouTube videos, and 36% say they focus on work-related activities.

Interestingly, this “zombie eating” phenomenon also seems to be impacting where Americans are eating. The office lunch break has always been considered a welcome relief from the monotony of office life, but 67% of respondents say they now take their lunch breaks in the office so they can stay connected. A total of 22% even say they eat lunch right in front of their computers, and the average respondent reports eating three meals per week sitting at their desk.

All of this screen staring is cutting down on the time Americans spend in the place where most meals are traditionally eaten, or at least used to be: the kitchen table. The average American only eats three meals per week at their kitchen table. Most of that time that used to be spent at the kitchen table is now being spent on the couch (79%), standing on the kitchen counter (64%), in bed (61%), and on the floor (48%).

Finally, on a quirky note, the survey also pinpointed an exact minute of the day when most Americans get a craving for a snack: 2:37 P.M.
Posted 1:27:00 AM