In two short years, 41-year-oldJason Hammer and 43-year-old Nigel Laskowski have made a big name for themselves on NewsTalk WIBC 93. FM.

According to the Indinapolis Business-Jounral,  WIBC-FM 93.1 took a big risk in 2016 putting the two former rock ’n’ roll disc jockeys in its key afternoon-drive time slot.

Today, with audience growing and ad sales booming, the move is paying off.

Hammer and Laskowski, both Hoosier natives, host a show that is so popular, the Emmis Communications Corp.-owned station is moving an hour of the popular syndicated Dana Loesch show to expand the local show, starting July 29.

“This has nothing to do with the Dana show not doing well,” said David Wood, WIBC’s program director. “This has everything to do with expanding a local show that is doing really well and that is still growing its audience. We think by starting an hour earlier, we’ll get an even bigger bump.”

The move has as much to do with expanding ad inventory as audience size.

“The Hammer and Nigel Show”—which currently runs 4-7 p.m.—has become one of WIBC’s highest revenue generators, sometimes selling out its ad inventory. The show runs 15 to 16 ads an hour, or 48 total for a sellout. So Emmis officials decided to start the show at 3 p.m. beginning July 29.

“Right now, ‘The Hammer and Nigel Show’ is a must-buy if I’m buying for an advertiser seeking the male audience. They own the male 25 to 54 [demographic] during their time slot,” said Bruce Bryant, president of locally based Promotus Advertising. “The fact that they’re selling out their show to the extent the station wants to expand it by an hour is a real strong statement about the strength of the show.” 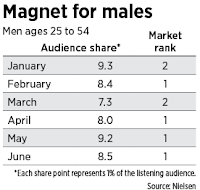 In the last six months, it ranked No. 1 in the market in four months and No. 2 in two months in the sought-after audience of 25- to 54-year-old men. In that demographic, it battles with classic rock stalwart WFBQ-FM 94.7 for the top spot. “That’s an important demo because it’s been proven to be one with a lot of expendable income,” Bryant said.

The show also has done better than many news-talk programs with women. In June, it scored a 5.5 share among all listeners in the 25 to 54 demographic in that time slot, which ranks it No. 7.

“‘The Hammer and Nigel Show’ is a bit different from your traditional news-talk show,” said Kristine Warski, media director for MKR, a local full-service advertising agency. “They’ve fused news and entertainment and, by doing so, are attracting a younger audience than news-talk has traditionally.”
Posted 2:48:00 AM