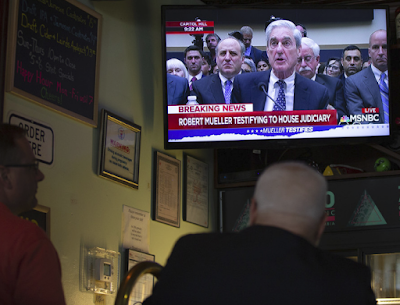 The Fox News dynamic duo of Breet Baier and Martha MacCallum cleaned up in the ratings, attracting the biggest audience on television when Robert Mueller appeared on Capitol Hill.

Mediaite reports Fox averaged 3 million viewers during the hearings — with 441,000 in the coveted 25-54 age demographic — and bested second-place MSNBC by more than half a million in total viewers. CNN limped in at sixth place while garnering 1.5 million viewers.

Baier and MacCallum are no strangers to these big moments, having anchored coverage earlier this year during the release of the Mueller report. That coverage brought in 2.8 million viewers for Fox.

The NY Times reports an average of 13 million Americans watched the former special counsel on the major cable and broadcast networks over the seven-and-a-half hours of questioning, according to statistics released on Thursday by Nielsen.

That audience was smaller than the 19.5 million people who watched James B. Comey, the former F.B.I. director, describe his dealings with President Trump to Congress in June 2017. Mr. Comey proved a surprising and animated witness, offering memorable one-liners (“Lordy, I hope there are tapes”) that attracted about the same audience as Game 2 of that year’s N.B.A. finals.

In terms of ratings, Mr. Mueller’s hearing also fell short of the Supreme Court confirmation hearings of Judge Brett M. Kavanaugh in September. That broadcast drew an average of 21 million viewers, who watched hours of testimony that probed difficult questions of gender, class and power.
Posted 1:56:00 AM