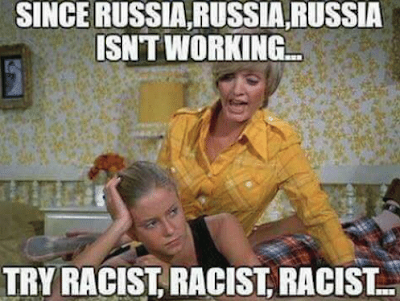 CNN and MSNBC said the word "racist" more than 4,100 times from July 14-21, according to The Hill citing a tally by Grabien Media, an online media production and news prep service.

The tally is based on transcripts from CNN and MSNBC programs, according to Grabien.

The word was repeatedly mentioned because of the furor surrounding President Trump's July 14 tweet calling on four Democratic congresswomen to go back to other countries.

The controversy surrounding the tweet, criticized as racist by Democratic lawmakers and some Republicans, was the dominant news story last week. It led to a House vote on a resolution condemning Trump's "racist" comments, and a vote on impeachment last Wednesday.

The four congresswomen targeted by the tweets are all U.S. citizens and members of minority groups: Reps. Ilhan Omar (Minn.), Alexandria Ocasio-Cortez (N.Y.), Rashida Tlaib (Mich.) and Ayanna Pressley (Mass). They have adopted the nickname "the squad."

Heading into the vote on the resolution condemning his comments, Trump declared he didn't "have a Racist bone" in his body.

"The 'Squad' is a very Racist group of troublemakers who are young, inexperienced, and not very smart," Trump wrote. "They are pulling the once great Democrat Party far left, and were against humanitarian aid at the Border...And are now against ICE and Homeland Security. So bad for our Country!"
Posted 1:25:00 AM