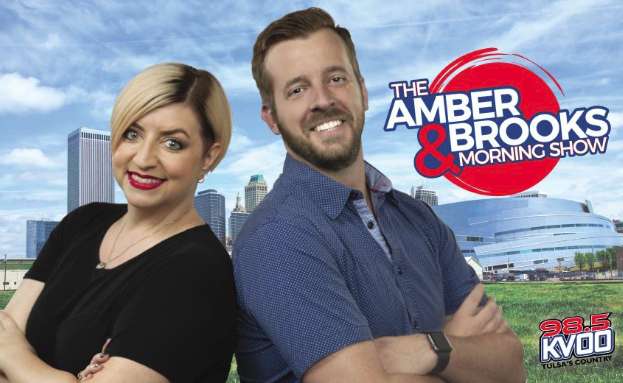 “As the rhythm and sound of Tulsa continues to evolve and thrive, we’ve updated our current KVOO morning lineup to reflect that vibe and Green Country’s unique characteristics,” said Steve Hunter, Griffin Communications director of radio operations. “The addition of Amber and Brooks in the morning brings their inherent energy, comedy, irreverence and honesty to KVOO. We’ve given them the freedom to do what they want, and it shows. This is a big moment for Tulsa and for Country radio.”

Glaze is a self-proclaimed artistic jack of all trades — she's a professional cake designer, stand-up comedian and songwriter among other things. She discovered her passion for radio just five years ago and has been making waves in the industry ever since. She got her start at 105.9 KLAZ in Hot Springs, Arkansas and previously served as a morning co-host alongside Phil Thompson on 104.5 The Fox in Wichita, Kansas. Three years ago, she moved home to Little Rock, Arkansas to create and host Hot Mess in the Morning on 106.7 The Ride KHLR. Glaze received her bachelor’s degree from the University of Central Arkansas, where she studied music and theater.

Williams recently joined KVOO in early 2019 after spending the last nine years at KTTS in Springfield, Missouri. During his time at KTTS, the station won multiple CMAs, ACMs and Crystal awards, including Radio Station of the Year for small markets, which Williams accepted at last year’s Academy of Country Music awards.

This morning lineup shift reflects a broader update in the 98.5 KVOO lineup. Both Glaze and Williams are new additions to Tulsa and the station this year, along with fellow newcomers Nikki Reid and Tanner Messer who host on KVOO from 3-7 p.m. and 7p.m. to midnight, respectively.

“KVOO is Tulsa’s Country radio station so we’re very excited to bring a renewed vigor, along with the best songs and the biggest stars in Country radio today,” Hunter said. “Being a locally-owned station with studios in Tulsa, we’re able to connect directly with Green Country listeners, have fun and share stories. We’ve had a very positive response to the new morning lineup so far and will continue to bring the best country radio in Tulsa.”
Posted 3:12:00 AM