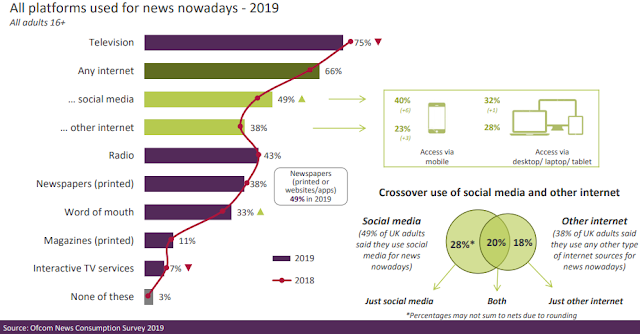 Young people in Britain have almost entirely abandoned television news broadcasts, according to Ofcom, while half of the country now gets its news from social media.

While the average person aged 65 and over watches 33 minutes of TV news a day, this falls to just two minutes among people aged 16-24, according to The Guardian citing the media regulator’s annual news consumption report.

The decline has been driven by audiences moving away from traditional live broadcast channels, where they might watch a popular drama and leave the channel on during the evening news bulletin, towards watching catchup content from streaming services.

The shift could have major implications for British politics, given services such as Netflix do not provide any news. Political parties have traditionally considered the BBC’s 10pm news bulletin to be their most important outlet for getting their message across to large swaths of the public, which in turn can shape policies being proposed and how they are presented.

TV news is still the main way that the British public learn about current affairs, however, in part because older viewers have remained loyal to traditional services.

Ofcom’s research also suggests that people are increasingly willing to wade into online arguments about news. “There is evidence that UK adults are consuming news more actively via social media. For example, those who access news shared by news organisations, trending news or news stories from friends and family or other people they follow via Facebook or Twitter are more likely to make comments on the new posts they see compared to the previous year.”

The most popular news source in Britain remains BBC One – consulted by 58% of the public – followed by ITV on 40% and Facebook on 35%. The increase in people turning to social media for news is being driven by the growing popularity of WhatsApp and Instagram as information sources.
Posted 1:41:00 AM