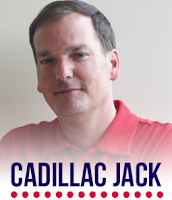 The company has given no details.

According To Rodney Ho at aj.com, he has been with Kicks for almost his entire career, except for a few years at sister station Y106.7 in the late 1990s. He has been morning host since 2006 with different hosts, including Kristen Gates, Dallas McCade, C.J. Lusk, Ali Mac and most recently Corey Dylan. For now, mid-day host McCade moves back to mornings as solo host while Dylan moves to mid days.

He started in 1993 at WKHX as a night jock, worked afternoons for many years before going to mornings.


Thank you John. Things happen for a reason. I look at this as a blessing. Keep doing your thing. I’ll be over more often now to say hi! https://t.co/ufCOTWpkJ1
— Cadillac Jack (@ATLCadillac) July 23, 2019

"There are so many people who are smarter than I am,” he said in an interview in 2013. “I don't have all the answers. I never will be the smartest guy in the room. I need coaching. I need good direction."

Ho reports WKHX has experienced relatively tepid Nielsen ratings. In mornings, 46-year-old Cadillac Jack (mostly with Dylan) has ranked between 15th and 19th, with shares between 2.2 and 2.6 this year in monthlies through June. In comparison, iHartMedia's morning show at 94.9/the Bull has seen shares between 2.8 and 3.3 during that same time period.Among 25-54-year-olds, his ratings were even worse, ranging from 1.2 to 1.9, ranked either 20th or 21st place. The Bull? 2.5 to 3.5, ranking between 11th and 15th place.
Posted 3:00:00 AM