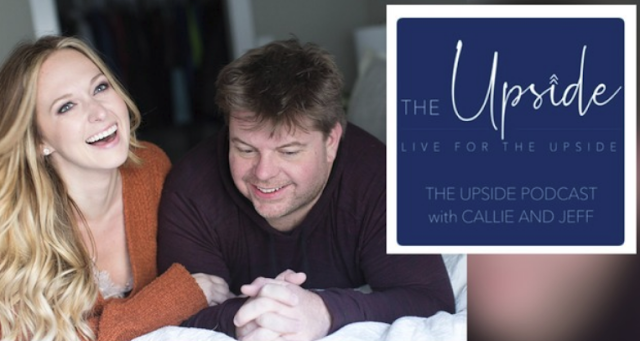 Longtime Atlanta radio personality and comedian Jeff Dauler and his wife, Callie, announced the launch of their new podcast this week.

According to Fox-TV5, The Upside Podcast with Callie and Jeff has quickly garnered positive feedback after being released on Tuesday. It has since gained nearly 2,000 5-star reviews and even ranked in Apple Podcast’s top shows less than 24 hours after it was announced.

"I knew we would be successful. I just didn't know we would be this successful this quickly," Jeff told FOX 5's Katie Burk. "The world is craving authentic positivity. It sounds cheesy, but it is truly an honor to be able to brighten people's day, make them laugh and give them some encouragement as they deal with life. The fact that we've grown so quickly just means we can have a positive impact faster."

The Daulers’ new podcast will serve as a creative space to spread the message of gratitude and positivity while still “keeping it real.” They’ll also discuss pop culture and current events, among other popular topics.

"We want to get rid of the idea that kindness and positivity have to be perfect. I'll shout it out from the rooftops right now: We are wildly imperfect, but we want to be better today than yesterday," Callie said.

"Everyone makes mistakes, everyone has bad days, there isn't a single person who is proud of every moment of their life. You can take bad moments and let them be part of a downward spiral into negativity, or you can take the worst moments, reflect on them, own them, find the upside and use them as fuel to do better next time."


Several episodes have already been released, but The Upside Podcast with Callie and Jeff will become a daily show starting August 8, which is the official launch date of their new brand, The Upside. In addition to the podcast, there will also be a weekly newsletter followed by a positivity-inspired line of merchandise, then eventually live shows.

Jeff Dauler has worked in radio for more than 27 years and has been in Atlanta since 2001. Most recently he worked as a co-host of The Jeff and Jenn Show on WSTR Star 94.1. He was let go in May and said being fired is what ultimately led to the creation of The Upside.

"We've had a dream of creating something positive since we made and gave gratitude journals to all of our wedding guests three years ago. If Jeff hadn't have been fired, we might not have had the courage to dive headfirst into this new chapter."
Posted 4:20:00 AM