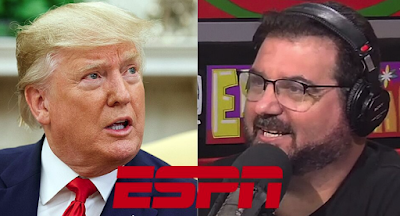 The Associated Press, citing an ESPN employee who spoke on condition of anonymity, reported that the reminder was sent on Friday, a day after Le Batard voiced strong disdain over the "send her back" chants that targeted Rep. Ilhan Omar (D-Minn.) at a Trump rally in North Carolina.

While offering his criticism, Le Batard also called out ESPN for its policy limiting on-air personalities from engaging in political discussion, saying it was "cowardly."

ESPN has not publicly addressed Le Batard's comment and whether he will face disciplinary action.

Le Batard, whose parents are from Cuba, gained massive attention late last week after taking time out of his radio show to condemn Trump's rhetoric and the chant he presided over.

“What happened last night, this felt un-American,” he said. “It's not the America that my parents aimed to get for us, for exiles, for brown people."

"There's a racial division in this country that's being instigated by the president and we here at ESPN haven't had the stomach for that fight because Jemele [Hill] did some things on Twitter, and you saw what happened after that and then here, all of a sudden, nobody talks politics on anything unless they use one of these sports figures as a meat shield in the most cowardly possible way to discuss these subjects," Le Batard added, referencing the former ESPN host whose anti-Trump tweets led the network to adopt a policy asking employees to avoid political discussion unless it related to sports figures.

Le Batard later described the “send her back” chants as “deeply offensive to me as somebody whose parents have made all the sacrifices to get to this country.”
Posted 2:22:00 AM