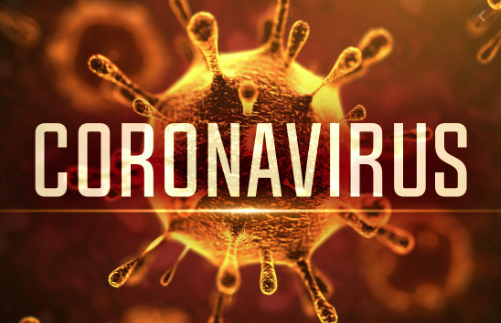 U.S. ON BRINK OF 500,000 CORONAVIRUS DEATHS: The U.S. is on the brink of reaching 500,000 coronavirus deaths since the pandemic began, with data from Johns Hopkins University putting the grim tally at just under 498,900 as of early this morning . Reflecting on the half-million number, Dr. Anthony Fauci, the nation's top infectious disease specialist, said on CNN yesterday, "It's nothing like we have ever been through in the last 102 years, since the 1918 influenza pandemic." It's taken just over a year to reach 500,000 deaths, with the first U.S. deaths recorded in early February last year. It took four months to reach the first 100,000 dead, another three months to reach 200,000, another three months to reach 300,000, and then around a month to reach 400,000 and just over a month to go from 400,000 on January 19th to 500,000. 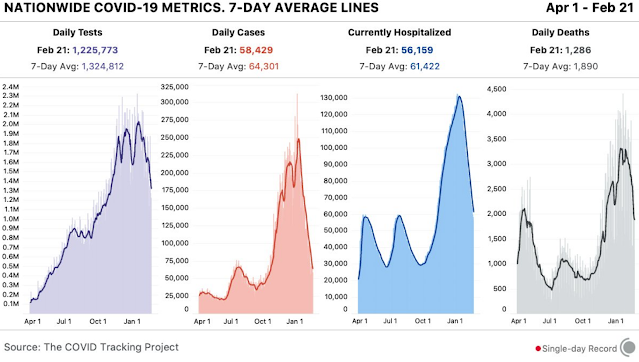 
➤ONE-THIRD OF TEXANS STILL HAVING WATER SUPPLY PROBLEMS, POWER MOSTLY RESTORED: In the wake of last week's disastrous situation in Texas in which millions of people were left without electricity and heat in record low temperatures after a winter storm, and then millions came under boil water orders, about one-third of Texans were still having drinkable water supply problems by yesterday evening, while most had their power back. Governor Greg Abbott said at a news conference Sunday afternoon that he expected power would be fully restored by later last night or today, and that more than three million bottles of water had been distributed as water services continued to be restored. As the weather warmed up into more normal Texas temperatures, people are dealing with broken pipes and flooding, and Abbott said yesterday that those without insurance could qualify for a FEMA reimbursement if their pipes had burst.

Texas was "seconds and minutes" away from having blackouts for months, power grid official says https://t.co/1b95OY9LVo

Some Texans are also facing huge, unprecedented energy bills because of last week's storm and freezing temperatures, soaring into the thousands of dollars, if they get electricity from a company that charges a market rate. Abbott said he'd held an emergency meeting with legislative leaders to, quote, "shield Texas families from unreasonable bills," and that a moratorium had been issued on disconnecting customers for non-payment while they address the energy bills issue.

➤LEADER IN ALLEGED OATH KEEPERS CONSPIRACY IN CAPITOL ATTACK CLAIMS GIVEN VIP PASS TO RALLY, MET WITH SECRET SERVICE: Former Army Ranger Jessica Watkins, a leader in an alleged Oath Keepers conspiracy in the U.S. Capitol attack, is claiming she was given a VIP pass to the earlier rally then-President Donald Trump and others spoke at, met with Secret Service agents, and was providing security for rally speakers and for lawmakers and others, including for the walk over to the Capitol, according to a new court filing in her case. Attorneys for Watkins made the claims in the filing arguing for her release from jail on bond as she awaits trial. In response to Watkins' claim, the Secret Service denied in a statement to CNN that private citizens were working with them to provide security on January 6th. The Justice Department indicted Watkins and eight other alleged members of the Oath Keepers militia group on several charges related to the attack. She has been jailed since being arrested last month.

➤ONE KILLED, FOUR WOUNDED IN AMERICAN LEGION CLUB SHOOTING: One person was killed and four others wounded, two of them critically, in a shooting at an American Legion club in Missouri early Sunday. No arrests were immediately reported in the attack in the town of Kennett before 12:30 a.m. yesterday. Mayor Chancellor Wayne told the Delta Dunklin Democrat newspaper that a private party was being held Saturday night at the American Legion building, which is available to rent.

BREAKING: Video shows the engine of United Flight 328 on fire after debris from the plane fell to the ground. The plane has now landed at Denver International Airport.#UA328 #Denver


➤FAA ORDERS UNITED TO INCREASE BOEING 777 INSPECTIONS, GROUNDINGS RECOMMENDED AFTER PLANE'S ENGINE FAILS SATURDAY: The Federal Aviation Administration (FAA) on Sunday ordered United Airlines to increase inspections of all its Boeing 777 planes that have the type of Pratt & Whitney engine that failed and burst into flames during a flight a day earlier. United said it's temporarily removing those planes from service, and Boeing is recommending grounding all aircraft with that model engine until the FAA sets an inspection protocol. United is the only U.S. airline with that model of engine on planes it operates. The moves came after United Flight 328 had to make an emergency landing at Denver International Airport on Saturday after one of its engines blew apart just after takeoff. None of the 241 passengers or crew were hurt, and noone on the ground was hurt either from pieces of the engine casing that fell to the ground.
➤ STUDY: AMERICANS ARE CHOOSING THEIR FRIENDS, JOBS, AND BRANDS THEY BUY BASED ON POLITICS: Americans are taking politics into account in many different aspects of their lives, and a new study finds that’s not necessarily a good thing. University of Washington researchers note, “Political polarization is having far-reaching impacts on American life, harming consumer welfare and creating challenges for people.” They say the trend is limiting job choices, making people feel lonelier, and even leaving people less physically healthy. Study author Dean Sprott adds, “For example, research has found that employees accept lower wages to work for politically like-minded entities, and people may select higher-priced products or ones that offer less-functional value.” The researchers suggest reducing the spread of ‘misinformation’ and limiting the length of political campaigns could limit the effects of polarization.
➤DISNEY WORLD REVEALS 50TH ANNIVERSARY CELEBRATION PLANS: Walt Disney World is gearing up for its 50th anniversary. Disney is officially calling it “The World’s Most Magical Celebration,” and it’s described as an “18-month event” beginning on October 1st, 2021. Disney World has revealed it will celebrate by bringing “EARidescence” to its four theme parks via new lighting effects and decorations. Disney Parks says Cinderella Castle at Magic Kingdom Park will “shimmer”, and its recent makeover will augmented with gold bunting, golden embellishments and other enhancements. Mickey and Minnie Mouse and the gang will also be dressed in special anniversary-inspired attire with gold and blue hues to match Cinderella castle. The “EARidescence” will also extend to the Hollywood Tower building at Disney’s Hollywood Studios, The Tree of Life at Disney’s Animal Kingdom, and Epcot’s Spaceship Earth will be lite up with new permanent lighting shining off its reflective panels.
🎾DJOKOVIC, OSAKA WIN AUSTRALIAN OPEN: Novak Djokovic and Naomi Osaka won the Australian Open over the weekend, giving Djokovic his 18th Grand Slam victory and Osaka her fourth. Top-seeded Djokovic of Serbia defeated fourth-seeded Russian Daniil Medvedev in straight sets 7-5, 6-2, 6-2 to win his third consecutive Australian Open and ninth overall. Third-seeded Osaka won the women's championship one day earlier, defeating Number 22 Jennifer Brady of the U.S. 6-4, 6-3.
Osaka has won all four Grand Slam finals she's competed in -- including the Australian Open in 2019 and the U.S. Open last year and in 2018 -- the first woman to do that since Monica Seles three decades ago.


🏒BRUINS TOP FLYERS 7-3 IN OUTDOOR GAME AT LAKE TAHOE: The Boston Bruins defeated the Philadelphia Flyers 7-3 Sunday in an outdoor game at Lake Tahoe. David Pastrnak scored three goals for Boston in the win. The NHL moved game time back to 4:30 p.m. PT to avoid the kind of problems there were a day earlier when bright sun caused slushy ice and led the game between the Colorado Avalanche and the Vegas Golden Knights to be suspended for more than eight hours. Because of coronavirus issues with having a game in an outdoor arena as the NHL usually does, the league took advantage of the situation this year to set up a makeshift rink on a golf course in a picturesque Lake Tahoe setting.

🏀TIMBERWOLVES FIRE HEAD COACH SAUNDERS: The Minnesota Timberwolves fired head coach Ryan Saunders last night, after Minnesota lost for the eighth time in nine games, according to media reports. Minnesota has the worst record in the NBA this season at 7-24. The Timberwolves will reportedly replace him with Toronto Raptors assistant coach Chris Finch. Saunders has been with the Timberwolves for parts of three seasons and had a 43-94 record.

⚾ROCKIES' DESMOND WON'T PLAY FOR SECOND SEASON AMID PANDEMIC: After opting out of playing last year's shortened season amid the coronavirus pandemic, Colorado Rockies outfielder Ian Desmond has announced he won't play this season either. The 35-year-old wrote in an Instagram story, "For now, I've decided to opt out of the 2021 season. My desire to be with my family is greater than my desire to go back and play baseball under these circumstances. I'm going to continue to train and watch how things unfold."

➤MAHOMES AND FIANCEE HAVE BABY GIRL: Kansas City Chiefs quarterback Patrick Mahomes and his fiancee Brittany Matthews had a baby girl on Saturday (February 20th). Mahomes announced her arrival on Instagram, sharing a photo of the baby's hand grabbing his finger with Matthews' hand on trop. The picture is taken looking at Matthews' upper chest and shows a necklace with the name "Sterling," for the baby's name, Sterling Skye Mahomes. The couple announced their engagement in September and soon after shared that they were having a baby.
Posted 4:35:00 AM