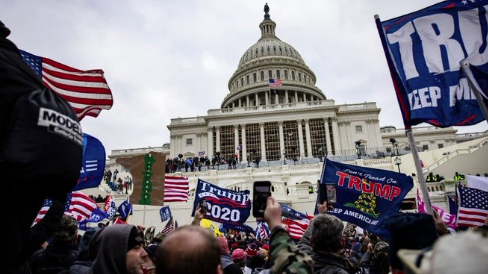 Current and former law enforcement and security officials told Senate lawmakers Tuesday that missed intelligence was what led to Capitol Police not anticipating the January 6th attack on the U.S. Capitol and therefore not having enough manpower to stop it. They also pinned blame on each other as they appeared in a joint Senate hearing in their first public testimony about the Capitol attack. The officials said they expected the day's protests to be similar to two other pro-Trump events in late 2020 that were much less violent. Former Capitol Police Chief Steven Sund, who resigned under pressure after the attack, said he didn't know at the time that his officers had gotten a report from an FBI field office on January 5th that warned about what extremists might do the next day. He said an officer on the task force had gotten the memo and forwarded it to a sergeant working on intelligence for the Capitol Police, but the information wasn't sent to other supervisors. Sund also said of the scene on January 6th, "No single civilian law enforcement agency . . . is trained and equipped to repel, without significant military or other law enforcement assistance, an insurrection of thousands of armed, violent, and coordinated individuals focused on breaching a building at all costs."

Ex-Capitol Police chief did not get FBI report warning of violence ahead of Capitol riot https://t.co/iiMCQ8Pl3z pic.twitter.com/d4OXyZlmWE


Also testifying were former Senate Sergeant-at-Arms Michael Stenger and former House Sergeant-at-Arms Paul Irving, who were Sund's supervisors in charge of security for the House and Senate, who also resigned after the attack. The acting chief of police for the Metropolitan Police Department, Robert Contee, testified as well. Sund contended that he spoke to Stenger and Irving about requesting National Guard in the days before January 6th, but that Irving said he was concerned about the "optics" of having them there. Irving denied those claims, saying, "We all agreed the intelligence did not support the troops and collectively decided to let it go." There was also disagreement between them on when the National Guard was requested, which took hours to arrive after the attack began. Sund said he requested the Guard at 1:09 p.m., but Irving said they didn't speak until at least 20 minutes later. For his part, Contee said he was "stunned" at the delayed response, describing Sund as pleading with Army officials to send Guardsmen as the attack was going on. Pentagon officials, who will testify next week, have said they offered National Guard assistance ahead of time, but it was rejected, and that it took time to get Guardsmen deployed after the attack began.

➤DRUGMAKERS SAY WILL BE BIG BOOST IN CORONAVIRUS VACCINE SUPPLY OVER NEXT MONTH: Makers of the coronavirus vaccines told lawmakers in a House subcommittee meeting yesterday that there will be a big boost in the delivery of vaccines over the coming month, and also said they'll be able to provide enough vaccine for most Americans to be vaccinated by the summer. Pfizer and Moderna said they expect to have provided the federal government with 220 million doses by the end of March, much higher than the 75 million that they have supplied so far. A third vaccine from Johnson & Johnson -- which is a single dose instead of two like the other vaccines -- is expected to be approved soon, and the company said it should ship enough for 20 million people by the end of March. The Centers for Disease Control and Prevention says that more than 44 million Americans have received at least one dose of either the Pfizer or Moderna vaccine so far.

➤TEXAS POWER GRID BOARD LEADERS RESIGNING, BIDEN TO VISIT HOUSTON: Five top board leaders of Texas' power grid operator ERCOT, including the chairwoman, said Tuesday that they would resign effective today, in the wake of the grid buckling during last week's winter storm that left snow and subfreezing temperatures. Millions were left without power and heat for days in the frigid weather, and millions also eventually had to boil their water. Texas Governor Greg Abbot said, "The lack of preparedness and transparency at ERCOT is unacceptable, and I welcome these resignations.
Meanwhile, the White House announced yesterday that President Biden and his wife, Jill Biden, will visit Texas on Friday in the wake of last week's crisis. They will go to Houston, where they will meet with local leaders and visit a health center where coronavirus vaccines are being distributed. Biden has declared a major disaster in Texas.


➤GRAND JURY FAILS TO INDICT ROCHESTER, NY OFFICERS IN DEATH OF DANIEL PRUDE: No charges will be brought against police officers in Rochester, New York, for the suffocation death of Daniel Prude, a 41-year-old Black man who was having a mental health crisis, after the grand jury declined to indict them, state Attorney General Letitia James announced yesterday. The officers put a hood over Prude's head and then pressed his body against the pavement until he stopped breathing. Prude died last March, but his death got national attention that led to days of protests after body camera video was released nearly six months later. James, whose office took over the investigation, said her office had, quote, "presented the strongest case possible" to the grand jury, but couldn’t convince them that the officers had committed a crime. Seven police officers were suspended over Prude's death, and their attorneys say they were following their training. 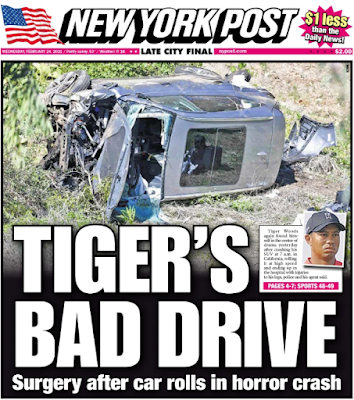 ➤TIGER WOODS SERIOUSLY INJURED IN CAR CRASH IN LOS ANGELES: Tiger Woods was hospitalized yesterday (February 23rd) following a serious car accident in L.A. County. According to TMZ, original reports said that the accident was so bad that officials used the jaws of life to free him from the vehicle, but they later said those reports weren't true.
Officials said in a statement, "On February 23, 2021, at approximately 7:12 AM, LASD responded to a single vehicle roll-over traffic collision on the border of Rolling Hills Estates and Rancho Palos Verdes. The vehicle was traveling northbound on Hawthorne Boulevard, at Blackhorse Road, when it crashed. The vehicle sustained major damage. The driver and sole occupant was identified as PGA golfer, Eldrick 'Tiger' Woods."

In a news conference, Deputy Carlos Gonzalez -- who was the first person to arrive at the crash scene, said that Tiger is lucky to be alive. He was wearing a seatbelt during the crash and officials believed that it saved his life.

Gonzalez also said that Tiger was lucid and could speak at the crash scene and did not appear to be under the influence of alcohol or any other substance.

The 45-year-old was in the area for his annual Genesis Invitational golf tournament at the Riviera Country Club in the Pacific Palisades.
It's not the first time Tiger has been in a high-profile car accident. Back in 2009, he crashed his SUV in an incident at his Florida home. Then in 2017, Tiger was arrested after cops found him passed out behind the wheel of his car in Jupiter, FL. Tiger said he had taken prescription medication before the accident and didn't realize the effect the meds would have on him.

Chinese court rules that a woman's housework is worth $128 a month https://t.co/jZzNFDV7CR

🏀NBA REVEALS ALL-STAR GAME RESERVES: The NBA revealed the reserves for next month's All-Star Game yesterday. Four of them are first-time All-Stars, including the New Orleans Pelicans' Zion Williamson, who at age 20 is the third-youngest player to ever make an All-Star team. The other All-Star rookies are: Boston’s Jaylen Brown; New York’s Julius Randle; and Chicago’s Zach LaVine. Phoenix’s Chris Paul is an All-Star for the 11th time, and Brooklyn’s James Harden is one for the ninth year in a row. The other reserves include Philadelphia’s Ben Simmons, Boston’s Jayson Tatum and Orlando’s Nikola Vucevic from the Eastern Conference, along with the Los Angeles Lakers’ Anthony Davis, the Los Angeles Clippers’ Paul George, Utah's Donovan Mitchell and Rudy Gobert, and Portland’s Damian Lillard from the Western Conference. Team captains LeBron James of the Lakers and Kevin Durant of the Nets will draft their teams next week.

🏀BAYLOR WINS IN RETURN, REMAINS UNDEFEATED: Number 2 Baylor won in their return last night after a three-week pause because of coronavirus issues, remaining undefeated for the season as they beat Iowa State 77-72. The team is now 18-0 for the first time in school history. Adam Flagler scored a season-high 22 points for Baylor.

🏈WASHINGTON FOOTBALL TEAM TO HAVE NEW NAME FOR 2022 SEASON: The Washington Football Team said yesterday (February 23rd) that it will have a new name for the 2022 season, and fans can follow the process at the new website WashingtonJourney.com. The site says, "We've transitioned from our old name. Now it's time to write a new legacy." Fans can submit name ideas on the site, with proposals presented including the Generals, Justice and Rhinos. Washington dropped its former name, the Redskins, after many years of criticism by Native American groups who say it is a racist slur.

🏀GASOL RETURNING TO SPAIN, WILL PLAY FOR BARCELONA: Six-time All-Star Pau Gasol, who last played in the NBA in the 2018-19 season, is returning to his native Spain and will play for Barcelona, the team with which he began his career. The 40-year-old first joined the NBA with the Memphis Grizzlies in the 2001-02 season, winning Rookie of the Year. He won two championships with the L.A. Lakers, and also played for the Chicago Bulls, San Antonio Spurs and Milwaukee Bucks.

⚾METS' WALKER HAS TO GIVE UP JERSEY NUMBER TO MR. MET: Pitcher Taijuan Walker has to give up his jersey number on his new team, the New York Mets, after signing a $23 million, three-year deal, because his Number 00 is worn by the team mascot, Mr. Met. The mascot is a man with a large baseball for a head. Walker is going back to Number 99, which he's worn before.
Posted 4:29:00 AM