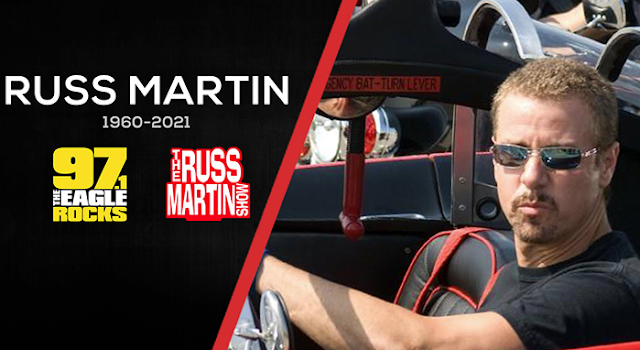 Longtime Dallas-Fort Worth radio host Russ Martin was found dead inside of his Frisco home a little after midnight Saturday, the Frisco Police Department said.

The cause of his death wasn’t known as of Saturday, but police said no foul play is suspected at this point in the investigation, reports The Fort Worth Star-Telegram.

A friend of Martin’s had come to check on him and found him unresponsive, the police department said in a news release. Officers responded to the home in Frisco around 12:30 a.m. They pronounced him dead.

Martin was the host of The Russ Martin Show on iHeaert Media's KEGL 97.1 The Eagle. The station shared the news of his death in a statement on Saturday, saying, “It’s with heavy hearts that we announce the passing of 97.1 The Eagle’s Russ Martin.”

Radio hosts on 97.1 paid tribute to Martin during the day, and discussed how they were processing the news. Martin, whose long-running show has been a staple in the lives of many North Texans, was known for being open and honest about his opinions, occasionally going into rants on topics he was passionate about. He spoke about supporting police, firefighters and first responders, as well as protecting animals.

Friends and listeners shared tributes to the radio host on social media Saturday as they mourned his untimely and unexplained passing. It was unclear how old he was, but Sadry believes he was around 60.