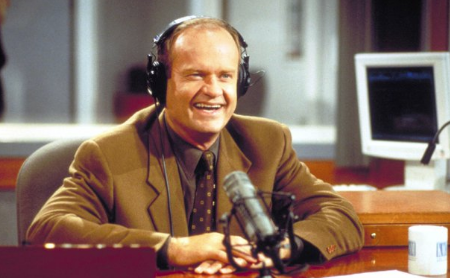 Reuters reports the news broke Wednesday at the ViacomCBS’ streaming presentation that the Emmy-winning sitcom would get a second life, along with many other series and films.

"Having spent over 20 years of my creative life on the Paramount lot, both producing shows and performing in several, I’d like to congratulate Paramount+ on its entry into the streaming world," Grammer said in a statement obtained by TVLine. "I gleefully anticipate sharing the next chapter in the continuing journey of Dr. Frasier Crane."

"Frasier is one of the most acclaimed comedies in modern television history and truly defines premium storytelling," said CBS Studios prez David Stapf in a statement. "There has long been a call from fans for its return, and that call is now answered thanks to the amazing Kelsey Grammer reprising his iconic role of Dr. Frasier Crane and a brilliant creative plan from Joe, Chris and Kelsey. We can’t wait to reveal its next chapter on Paramount+."

Production is reportedly slated to begin production this summer.

Other series coming to Paramount+ include the seventh and final season of "Younger," two "Yellowstone" spinoff series titled "6666" and "Y: 1883," and a "Ray Donovan" feature film with the series' star Liev Schreiber set to co-write.

"Criminal Minds" is also getting the reboot treatment and will be accompanied by a companion docuseries. The procedural drama originally aired for 15 years on CBS.

Paramount+ will also have a new true crime anthology series, titled "American Tragedy," based on the success of the Paramount Network miniseries "Waco."

And a slew of series adapted from Paramount’s extensive library of films including "The Italian Job," "Love Story,"  and "Fatal Attraction."

New "Pet Sematary," "Workaholics," "Paranormal Activity" movies are heading to the streaming service and revivals of "Reno 911" and "Inside Amy Schumer" as specials.