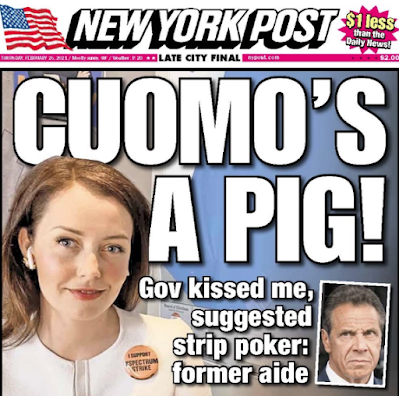 A former member of New York Governor Andrew Cuomo's administration gave more details yesterday after having accused him of sexual harassment more than two months ago.
Lindsey Boylan said Cuomo once kissed her on the lips without consent, said to her and two others that they should play strip poker, and, quote, "would go out of his way to touch me on my lower back, arms and legs." Boylan, now running for Manhattan borough president, made the allegations in a post on the website, Medium.
A spokesperson for Cuomo said the, quote, "claims of inappropriate behavior are quite simply false." Boylan, a former deputy secretary for economic development and special adviser to the governor, said the kiss happened at the end of a one-on-one meeting, writing, "As I got up to leave and walk toward an open door, he stepped in front of me and kissed me on the lips. I was in shock, but I kept walking."

Today I am telling my story. I never planned to share the details of my experience working in the Cuomo administration, but I am doing so now in hopes that it may make it easier for others to speak their own truth. https://t.co/n1Lcc6Ac66

Boylan also alleged that during an October 2017 flight, as she and Cuomo sat with a press aide and a state trooper, Cuomo said, "Let’s play strip poker." She also claimed Cuomo created a culture of sexual harassment, including making unflattering comments about female colleagues’ weight, ridiculing their romantic relationships and having roses delivered to them on Valentine’s Day. The Associated Press obtained memos from 2018 indicating Boylan resigned after complaints that she belittled and yelled at her staff. Boylan said the records were leaked to "smear" her, and that she left because her relationship with Cuomo's senior team, quote, "grew hostile after I started speaking up for myself."

➤FDA SAYS JOHNSON & JOHNSON COVID VACCINE OFFERS STRONG PROTECTION: The Food and Drug Administration said Wednesday that Johnson & Johnson’s coronavirus vaccine offers strong protection against severe Covid-19. That clears another step to final approval of the vaccine, which unlike the Pfizer and Moderna vaccines that are currently being used, is just one shot, instead of two several weeks apart. FDA scientists said the Johnson & Johnson vaccine is about 66 percent effective at preventing moderate to severe Covid-19, and about 85 percent effective against severe illness. The FDA's independent advisers will debate Friday whether the evidence is strong enough to approve the new vaccine.

U.S. to Distribute Masks to Hard-Hit Communities: The White House said yesterday that the federal government will be distributing millions of face masks to Americans, but they won't be sent to everyone and won't go through the mail, ideas that had been considered. Instead, the administration will send more than 25 million cloth masks to underserved communities that have been hard-hit by the coronavirus, and they will be given out through Federally Qualified Community Health Centers and the nation’s food bank and food pantry systems.

NIH to Study 'Long Covid,' Now Named 'PASC': The National Institutes of Health announced this week that it's launching an analysis of "long Covid," what sufferers have been calling it when they have lingering symptoms for weeks or months after having Covid-19. The NIH will try to figure out what's causing the range of symptoms, which some studies show can be experienced by as many as one-third of Covid patients. Dr. Anthony Fauci, meanwhile, said yesterday that "long Covid" now has an official name, "PASC," which stands for "post-acute sequelae of SARS-CoV-2 infection."

➤COVID-19 CAN SURVIVE ON CLOTHING FOR UP TO THREE DAYS:  It seems if you go out you should be prepared to do some laundry when you get home. Researchers in the UK have found that COVID-19 can survive on clothing for up to three days. The scientists found that polyester enables the virus to survive at infectious levels for up to 72 hours, it dies within 24 hours on 100 percent cotton, and only survives on a polycotton blend for six hours. The findings are concerning, because if it sticks to the clothing of healthcare professionals it could then be easily spread outside of the hospital. Researchers note the only way to fully remove the virus from 100 percent cotton clothing is to wash it with laundry detergent at 152.6 degrees Fahrenheit. The experts say this reinforces the recommendation that all healthcare uniforms should be washed on site at hospitals or by an industrial laundry company.

➤CHIEF: CAPITOL POLICE KNEW ABOUT VIOLENCE THREAT ON JANUARY 6TH, BUT ATTACK FAR WORSE THAN EXPECTED: U.S. Capitol Police Acting Chief Yogananda Pittman said in remarks prepared ahead of her House testimony today that Capitol Police knew about the threat of violence on January 6th from armed extremists, but the attack on the U.S. Capitol that unfolded was still far worse than they'd expected, and they were unprepared to repel what amounted to an invasion. That seemed to differ somewhat from what Steven Sund, the former Capitol Police chief who resigned under pressure after the attack said in his testimony Tuesday. He said they had expected the day's protests to be similar to two other pro-Trump events in late 2020 that were much less violent. Pittman said intelligence collected ahead of time led them to take measures they normally don't, including giving officers assault rifles to use to protect members of Congress, intercepting radio frequencies used by the rioters, and sending spies to the rally earlier that day at which then-President Donald Trump and others spoke. Pittman also says there were, quote, "internal challenges" as Capitol Police responded to the attack, including that officers didn’t understand when they were allowed to use deadly force, and less-than-lethal weapons officers had weren't as successful as they'd expected.


➤BIDEN ORDERS REVIEW OF U.S. SUPPLY CHAINS, WANTS TO STRENGTHEN THEM: President Biden signed an executive order Wednesday reviewing U.S. supply chains with the goal of strengthening them for advanced batteries, pharmaceuticals, critical minerals and semiconductors. The U.S. has become increasingly reliant on imports of those goods, which is a potential national security risk, and boosting supply chains in the U.S. is also intended to increase manufacturing jobs. Strengthening the supply chain has apparent bipartisan support, with Biden meeting with Republican and Democratic lawmakers at the White House yesterday before the signing. Biden said, "It was like the old days. People were actually on the same page." 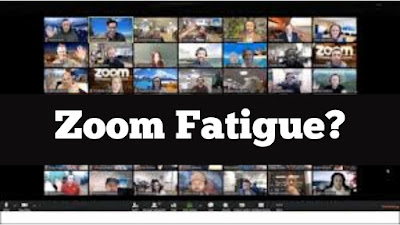 ➤RESEARCHERS IDENTIFY FOUR CAUSES OF ‘ZOOM FATIGUE’ AND THEIR SIMPLE FIXES:  If you’re tired of video conferences you’re not alone. Stanford University researchers have found there are four main reasons why video chats fatigue humans: 1) Excessive amounts of close-up eye contact is highly intense (faces on video calls can appear too large for comfort, which simulates a personal space that you normally experience when you’re with someone intimately); 2) Seeing yourself during video chats constantly, and in real time is fatiguing (studies have found that seeing your reflection repeatedly makes you more critical of yourself), 3) Video chats dramatically reduce of usual mobility (movement is limited in an unnatural way due to the limitations of video-chatting); and 4) The cognitive load is much higher in video chats (we have to work harder to send and interpret gestures and nonverbal cues). There are ways to deal with certain issues. Certain things can be remedied by existing features on video-chat platforms, for example, using the “hide self” button to hide the view of your own face while chatting. But otherwise, researchers expect we will adapt to using video chats more comfortably, just as we once adapted social protocols for using elevators.
➤TIGER WOODS WON'T FACE CRIMINAL CHARGES FOR CAR CRASH: During a Facebook Live chat, Los Angeles County Sheriff Alex Villanueva said that Tiger Woods won't be facing any charges for the crash that happened on Tuesday (February 23rd).

According to The NY Post, he said, “This remains an accident. An accident is not a crime. They do happen, unfortunately." Villanueva said Woods could eventually be cited for inattentive driving, but that would be an infraction, not a misdemeanor.

As previously reported, Woods was driving on Hawthorne Boulevard when he lost control of his vehicle.


On Tuesday night (February 23rd), it was reported that Tiger was "awake and responsive" after undergoing emergency surgery on his legs. Tiger released an official statement to his Twitter account, saying that he suffered “comminuted open fractures affecting both the upper and lower portions of the tibia and fibula” in the accident. His ankle was shattered as well.
🏌CAR ACCIDENT INJURIES COULD MEAN END OF TIGER WOODS' CAREER: Tiger Woods underwent surgery for significant injuries to his right leg, including compound fractures, after a car accident on Tuesday, and while many were saying Woods was lucky to be alive after his car rolled over in the crash, the injuries could spell the end of his career. At age 45, Woods has already undergone multiple surgeries during his career on his left knee and back, and at the time of the accident, he was still recovering from a microdiscectomy to remove a pressurized disk in his back that was pinching a nerve. He'd played only seven times since July, never making it into the top 35, and remains one victory short of his 83rd, which would set a PGA Tour record. Dr. Michael Gardner, chief of orthopedic trauma at Stanford Medical Center, told the AP, "I would say, unfortunately, it’s very, very unlikely that he returns to be a professional golfer after these injuries."

⚾REIGNING AL MVP ABREU POSITIVE FOR CORONAVIRUS: The Chicago White Sox said yesterday that first baseman Jose Abreu, the reigning American League MVP, had tested positive for the coronavirus. General manager Rick Hahn said Abreu is "completely asymptomatic" and that testing shows he has Covid-19 antibodies, with Abreu believing he had a mild case in January. He will spend a few days away from the team, with manager Tony LaRussa saying he'll likely join them by Monday.

🏒CANADIENS FIRE HEAD COACH JULIEN: The Montreal Canadiens fired head coach Claude Julien on Wednesday, as well as associate coach Kirk Muller. The Canadiens have lost three games in a row after returning from a one-week break, and lost six of eight games overall after a strong start. Assistant coach Dominique Ducharme was appointed interim coach. Julien has been with Montreal since midway through the 2016-17 season.

🏀SUNS' BOOKER REPLACES LAKERS' DAVIS FOR NBA ALL-STAR GAME: The Phoenix Suns' Devin Booker was chosen yesterday to replace injured L.A. Lakers player Anthony Davis in next month's NBA All-Star Game. Commissioner Adam Silver chose Booker as Davis' replacement one day after Booker was snubbed by the league's head coaches for a reserve spot in the All-Star Game, which will be played March 7th in Atlanta.

🏈REPORT: NFL WANTS TO START 17-GAME SCHEDULE NEXT SEASON: The NFL and team owners want to begin a 17-game schedule starting next season, the Washington Post reported yesterday. A 17-game regular season would likely have a shortened preseason, reduced by one game to three. The most recent collective bargaining agreement ratified last March gave the NFL the right to implement a 17-game season, with players getting financial concessions in return. 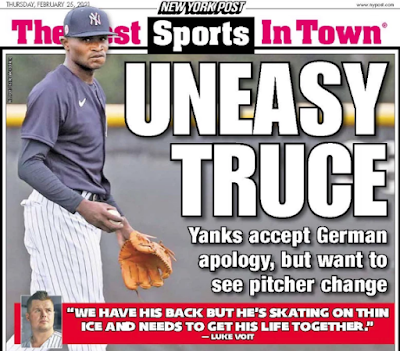 ⚾YANKEES GERMAN APOLOGIZES AFTER DOMESTIC VIOLENCE SUSPENSION: New York Yankees pitcher Domingo German made a public apology Wednesday for his actions that led to him serving a lengthy suspension under MLB’s domestic violence policy. The 28-year-old said through a translator he wanted, quote, "to sincerely apologize to the Steinbrenner family, my teammates, the front office and those around me who love me. I have made mistakes of which I’m not proud of." German was put on leave in September 2019 while MLB investigated an alleged domestic violence incident involving his girlfriend. He missed the rest of the 2019 season, then was suspended in January 2020 for 63 games. Because last season was shortened due to the pandemic, he missed all of it plus the playoffs. He returned last week for the start of spring training and is hoping to earn a spot in the rotation.
Posted 4:16:00 AM