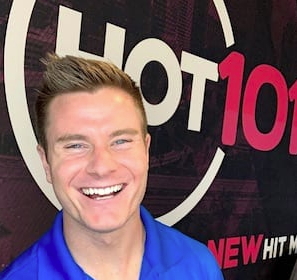 Scott will continue to be heard on Miguel & Holly Mornings, and then stay on to host the weekday midday show from 10am - 3pm. Scott replaces long time HOT 101.5 personality Chase Pulido, who was recently promoted to a National Digital Content role within CMG. Scott will also join our CMG Orlando sister station, Country music, K92.3 (Orlando) as their night show host.

Scott started his radio career at CMG Tampa & Hot 101.5 back in April, 2018 as a street teamer where his energetic, outgoing personality and leadership qualities quickly earned the attention of Hot 101.5's Miguel & Holly - who asked him to sit in and learn the "biz" in June, 2018. From there, Scott continued to grow his skills by becoming a fill-in and weekend on-air talent and eventually, he was asked to host on-air shifts on CMG Orlando sister stations POWER 95.3 (WPYO) and K92.3 (WWKA).

"Scott is a star and is such a natural at rocking a crowd and creating relatable connections with our staff, audience, partners and clients," said Director of Branding and Programming, Will Calder. "Scott's story is the perfect example of how talent, hustle and a great attitude can turn dreams into reality!"

"It means the world to think back to being an inexperienced college kid telling everyone in my first interview my grand dreams of being in radio and now living those dreams," said Scott. "Thanks so much to Will Calder, Miguel Fuller, Holly O'Connor, Nate Reed, Steve Stewart, Keith Lawless, Steve Smith, Tim Clarke and everyone who has ever believed in me for presenting me with such an amazing opportunity."