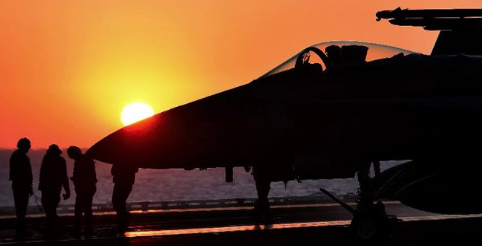 The U.S. launched airstrikes yesterday evening on facilities in Syria used by an Iran-backed Iraqi militia. One of the members of the Kataeb Hezbollah militia was killed and several others were wounded, AP reported, citing an Iraqi militia official. The Pentagon said the airstrikes were carried out in retaliation for a rocket attack in Iraq earlier this month that killed a civilian contractor and wounded a U.S. servicemember and other coalition troops. Defense Secretary Lloyd Austin told reporters, "We said a number of times that we will respond on our timeline," and Pentagon spokesman John Kirby said earlier, "The operation sends an unambiguous message: President Biden will act to protect American and coalition personnel." 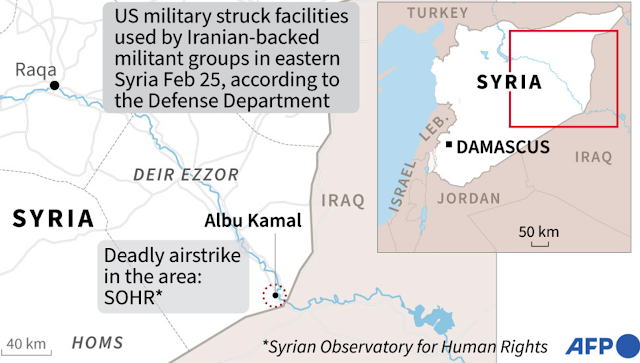 The airstrikes were the first military action taken by Biden since he became president last month.

➤HOUSE TO VOTE ON COVID BILL AFTER PARLIAMENTARIAN SAYS CAN'T INCLUDE MINIMUM WAGE HIKE: The Democratic-led House is set to vote today on President Biden's $1.9 trillion Covid-19 relief package, one day after a ruling from the Senate parliamentarian that means the final legislation that reaches Biden for his signature almost certainly won't include a minimum wage increase to $15 an hour. A near party-line vote is expected today on the package, which includes among its provisions $1,400 direct payments to Americans and billions of dollars for coronavirus vaccinations and testing, schools, state and local governments, the hard-hit restaurant and airline industries, and emergency unemployment benefits. The House legislation will include raising the federal minimum wage to $15 an hour by 2015, more than double the current $7.25. But in the Senate, the parliamentarian said the minimum wage hike can't remain for the legislation to pass through special rules that allows it to avoid a Republican filibuster. 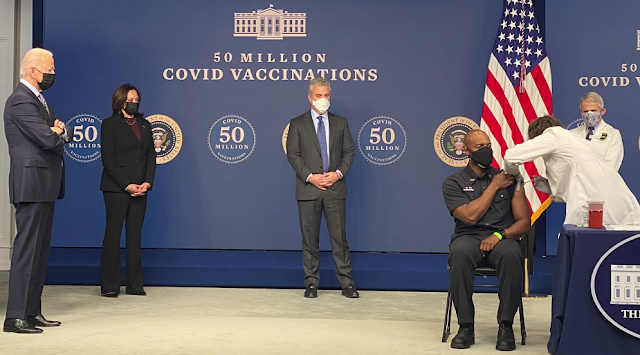 ➤BIDEN MARKS 50 MILLION VACCINATIONS SINCE HE TOOK OFFICE: President Biden on Thursday marked the administration of 50 million doses of coronavirus vaccines in the U.S. since he took office a little over five weeks earlier. Speaking at a White House ceremony during which four front-line workers were vaccinated, Biden said his administration is on course to exceed his promise of 100 million vaccine doses being given in his first 100 days in office, and said, "The more people get vaccinated, the faster we’re going to beat this pandemic." Biden said there will be a, quote, "massive campaign to educate people" about the safety and effectiveness of the vaccines, and stated that a third vaccine, one that requires only one dose from Johnson & Johnson, is likely to get approval very soon, saying, "We have a plan to roll it out as quickly as Johnson & Johnson can make it." But Biden also warned about the variants that are out there and urged Americans to keep wearing face masks and social distancing, saying, "This is not the time to relax."
➤CDC WARNS: COMMON COLD OUTBREAKS TO BE EXPECTED AS SCHOOLS REOPEN: When schools begin reopening for in-person learning, the Centers for Disease Control and Prevention (CDC) is warning that outbreaks of the common cold could become more commonplace. The CDC looked at data on the reopening of schools in Hong Kong to get an idea of what we might expect here in the U.S. In Hong Kong, schools closed due to COVID-19 from late January to May 2020, and they reopened briefly before closing again in July amid a surge in cases. When schools and child care centers re-opened in October, cases of the common cold surged among children despite the mandatory use of face masks and other measures in place to curb the spread of COVID-19. The researchers think the kids were more susceptible to common-cold-causing rhinoviruses because they had spent the majority of the year away from others outside their household, decreasing the number of chances they had to be exposed to rhinoviruses and ultimately build up immunity. Researchers say other reasons for the rhinovirus outbreaks could be that the things we’ve been doing to prevent the spread of the coronavirus just aren’t as effective against rhinoviruses, for example, it’s known that rhinoviruses are more resistant to certain disinfectants than coronaviruses and influenza viruses are.
➤CAPITOL POLICE CHIEF SAYS HAD INTELLIGENCE ABOUT POSSIBLE CAPITOL ATTACK, BUT NOT SIZE OF IT: Acting U.S. Capitol Police Chief Yogananda Pittman testified before a House committee yesterday about the January 6th attack on the U.S. Capitol, saying they had received intelligence warning of the potential for violence and made preparations, but weren't expecting how many people would take part in that day's assault. Pittman said that three days earlier, Capitol Police distributed an internal document warning armed extremists were readying for violence and could invade Congress, and took steps including giving assault-style rifles to agents guarding congressional leaders and having evacuation vehicles for top lawmakers to escape the Capitol if needed. But AP noted that many Capitol Police officers have said they were given little or no information or training for what they'd face that day.

Capitol Police Chief Yogananda Pittman said insurrectionists who stormed the Capitol "weren’t only interested in attacking members and officers. They wanted to send a symbolic message to the nation as to who was in charge of that legislative process." https://t.co/NjFtFd7iwK pic.twitter.com/FMaUzeRqIE


Chatter About Attacking Capitol During Biden Speech: Pittman also said when asked by lawmakers why fencing and National Guard units were still around the Capitol that they are keeping their security posture high because of intelligence that some extremists have discussed plans to attack the Capitol during President Biden's State of the Union-like address to a joint session of Congress, which is likely to take place next month. She said, "We know that members of the militia groups that were present on January 6 have stated their desire that they want to blow up the Capitol and kill as many members as possible, with a direct nexus to the State of the Union."

American Airlines pilot reports seeing "a long, cylindrical object" come startlingly close to the aircraft as it was flying over New Mexico. https://t.co/CFWb2ZMjaw

➤FORECASTERS: ‘AVERAGE’ HURRICANE SEASON MAY NEED TO BE REDEFINED: The 2021 Atlantic basin hurricane season begins on June 1st, but you might be feeling like hurricane season just ended. 2020 had a total of 30 named storms, including three that developed before the official start of hurricane season on June 1st, and last season shattered the record for the most named tropical cyclones in a single year, breaking the previous record set in 2005. All of this is to say a new study suggests that what is considered the “normal” amount of storm activity in the Atlantic basin may need to be redefined. University of Miami researcher Brian McNoldy says “the bar has been raised” for what can be expected in this new normal. He says the number of named storms is rising, as well as the annual average numbers of hurricanes and major hurricanes (considered Category 3 or stronger.) What constitutes “normal” is determined by three-decade spans—a system established by the National Oceanic and Atmospheric Administration (NOAA)—and the baseline is re-established every ten years. McNoldy says, “If NOAA continues to use a 30-year normal as they’ve always done, then this is just the mental adjustment we make every decade. When the baseline goes up, it means that it takes more activity to be above that new normal.”

➤EX-U.S. OLYMPICS GYMNASTICS COACH KILLS HIMSELF AFTER CRIMINALLY CHARGED: Former U.S. Olympics gymnastics coach John Geddert killed himself on Thursday, hours after he was charged with sexual assault, running a criminal enterprise, and human trafficking by forcing girls to train at his Michigan gym and then abusing them. The 63-year-old, whose body was found at a rest area in Michigan, could have faced years in prison if convicted. Geddert was head coach of the 2012 U.S. women’s Olympic gymnastics team, which won a gold medal. He was charged with using his reputation to commit a form of human trafficking by making money through the forced labor of young gymnasts. Michigan Attorney General Dana Nessel said, "The victims suffer from disordered eating, including bulimia and anorexia, suicide attempts and attempts at self harm, excessive physical conditioning, repeatedly being forced to perform even when injured, extreme emotional abuse and physical abuse, including sexual assault."

Former USA Olympic gymnastics coach John Geddert killed himself Thursday, hours after he was charged with two dozen crimes stemming from allegations that he physically, emotionally and sexually abused gymnasts under his care. pic.twitter.com/GbTlQmKfu2


🏀TIMBERWOLVES' BEASLEY SUSPENDED FOR 12 GAMES FOR GUN THREAT: The NBA announced yesterday that the Minnesota Timberwolves' Malik Beasley had been suspended for 12 games without pay after he recently pled guilty to a felony charge of threats of violence for pointing a rifle at a family. The Timberwolves said they fully support the decision. A couple and their 13-year-old child who were house-hunting in September pulled up the home where Beasley was living with his wife and their baby and saw the property was roped off. Beasley approached their vehicle and pointed a rifle as he told them to leave. He was sentenced earlier this month to 120 days in jail.

⚾SPRING TRAINING GAMES BEGIN THIS WEEKEND: MLB's spring training games will begin this Sunday, just over one month ahead of opening day, which will be April 1st. Fans will be allowed to attend all games in Arizona and Florida that are played in the 23 spring training ballparks. The average maximum capacity that will be allowed in is 20 percent, with face masks required and tickets sold in pods to help with social distancing between unrelated groups.

🥊MIKE TYSON CRITICIZES HULU MINISERIES ABOUT HIM: Hulu announced yesterday that it has ordered a miniseries called, Iron Mike, about the life of boxing great Mike Tyson, with a press release saying it will explore his, quote, "wild, tragic and controversial life and career." Tyson, who isn't involved in the miniseries, quickly slammed Hulu, writing on Instagram, "Hulu’s announcement to do an unauthorized mini-series of the Tyson story without compensation, although unfortunate, isn’t surprising. This announcement on the heels of social disparities in our country is a prime example of how Hulu’s corporate greed led to this tone-deaf cultural misappropriation of the Tyson life story." Tyson also said that an "authorized" autobiographical project would be announced soon.

🏀NBA INVESTIGATING CLAIM JAZZ EXEC VP MADE BIGOTED COMMENTS DURING MEETING: The Utah Jazz announced yesterday that they are cooperating with an NBA investigation into a claim made by former Jazz player Elijah Millsap that executive vice president of basketball operations Dennis Lindsey made bigoted comments during a end-of-season meeting in 2015. Millsap, who was at the meeting, made the allegation on social media Wednesday night, claiming the Lindsey, quote, "made bigot remarks in my exit interview while conversing with [head coach Quinn] Snyder 'if you say one more word, I'll cut your Black ass and send you back to Louisiana.'" Lindsey said in response to the allegation, "I categorically deny making that statement," and Snyder told reporters that he, quote, "can't fathom Dennis saying something like that."