He was 89-years-of-age, according to the San Francisco Chronicle.

Brought in from Chicago and asked to challenge Don Sherwood, the heretofore king of morning drive time on KSFO, for 37-years Dunbar built a folksy style, calming voice and friendly demeanor into the “KGO Morning News,” a show that long outlasted the notorious Sherwood.

“Jim Dunbar” became its own news brand on morning radio and TV to the point that when a man claiming to be the Zodiac killer called to demand an audience with attorneys Melvin Belli and F. Lee Bailey, he would only do so on Dunbar’s show.

Dunbar was first San Francisco personality to be inducted into the Radio Broadcasters Hall of Fame, in 2000.

“Jim Dunbar is in both the local and national radio halls of fame for good reason,” said Ben Fong-Torres, a Bay Area radio historian and contributor to The Chronicle. “He changed the Bay Area radio landscape by helping turn KGO from an also-ran into the greatest powerhouse on the dial, with a 30-year run at the top of the ratings.”

In 1956, he arrived in New Orleans, as both station manager and disc jockey spinning jazz records. On-air, he replaced Dick Van Dyke who had been lured away to Broadway.  At a party in the French Quarter he met a Southern Belle by the name of Beth Monroe.  She was still a student at Sophie Newcomb, the women’s answer to the all-male Tulane University, but Dunbar wouldn’t wait. They were married before she graduated and celebrated their 60th anniversary in December. 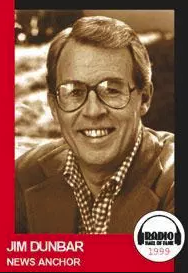 He was playing the Big Bopper and Buddy Holly, at a top-40 station in Chicago when Dunbar found a job in San Francisco, in hopes that his wife would stop complaining the Chicago weather.

Dunbar tried some formats of his own, including the zany “Man on the Street,” interviews of unsuspecting citizens conducted by comics Mal Sharpe and Jim Coyle.

“There were stations doing news and stations doing talk,” he told The Chronicle, “but nobody put it together quite the way that we did.” KGO became so successful that the station expressed regret that it did not copyright the slogan “newstalk.”

Ken Berry, retired news director at KGO, was amazed that Dunbar could get into his chair pick up something from the news wire and turn it into a story like he’d been working all night on it.  For most of his career, Dunbar was teamed up with the late Ted Wygant. The 5 a.m. hour was called “the Zoo Hour” and it was always Dunbar’s goal to get Wygant laughing so hard he’d spit up his coffee.

“Jim never wanted to be the voice of authority. He wanted people to wake up in a good mood and get a laugh with their news,” said Berry. “If you had to get bad news you wanted to get it from Jim Dunbar. He just had a reassuring way about him.”
Posted 1:00:00 AM