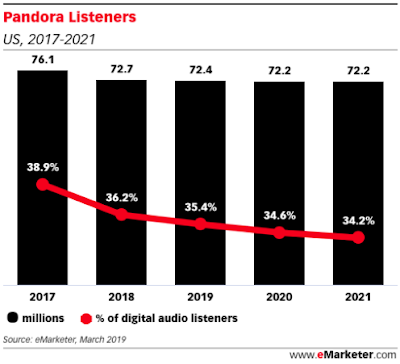 More than 72 million people in the US will listen to Pandora on a monthly basis in 2019, according to the latest forecast from eMarketer. That’s 35.4% of digital audio listeners in the country.

eMarketer user estimates are different from the number of monthly active users (MAUs) that companies report because we try to estimate the number of individual human users, rather than accounts. For example, they consider ways a single account might include multiple listeners because of shared logins, household listening or in-car listening. This is true across our audio streaming estimates, including those for Pandora, Spotify, Apple Music and Amazon Music.

Last month, Pandora released a study conducted by Edison Research and Carat that broke down what it calls the “co-listening factor.“ The study sought to identify when multiple people in the same space were listening to Pandora and where they were listening.

“Understanding these demographic components and how people are listening enables marketers to deliver relevant content,” said Keri Degroote, senior vice president of research and analytics at Pandora. “We felt it was a missed opportunity that co-listening is not being measured and included in digital audio plans.”

According to a Pandora study—which quantified earned audio impressions and the results of online diaries from 1,172 US consumers ages 13 and older—57% of Pandora listening occurred in the home, and 46% of in-home listening was done alongside others in the household. While just 8% of listening time took place in the car, 44% of that time was spent listening with others.

The focus on co-listeners is a logical step for Pandora, which was acquired by SiriusXM Holdings in a deal announced last September. The SiriusXM radio platform is known for its substantial in-car audience—and this puts Pandora in a unique position to reach this segment of co-listeners. But even so, eMarketer expects Spotify’s audience will surpass Pandora listeners by 2021, and monthly audiences for both Amazon Music and Apple Music are growing at a much faster rate. Pandora, on the other hand, is expected to lose about 300,000 monthly listeners in the US this year. That's a 0.5% decline after 2018’s sharper 4.4% decrease.
Posted 2:24:00 AM