A tiny fraction of the Twitter’s ­users are responsible for the lion’s share of tweets — and they tend to be younger, wealthier and more liberal than the national average, according to a Pew Research Center study published Wednesday.

“Twitter users as a group express distinct opinions relative to the public as a whole on some political values, particularly when it comes to views having to do with race, immigration and gender,” researchers wrote.

And they are responsible for an outsized share of messages posted to the platform, reports The NYPost. 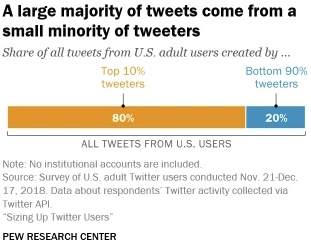 And roughly 10 percent of those users are responsible for 80 percent of tweets — meaning just 2 percent of Americans are contributing to a majority of the site’s dialogue, the researchers noted.

The prolific tweeters send out missives about 138 times a month — while most users post just twice monthly, found the study found.

The “tweeple” are also disproportionately women who post regularly about politics, according to Pew.

And of all Americans who lean toward either major political party, 52 percent lean Democrat, while 60 percent of Twitter ­users lean that way. 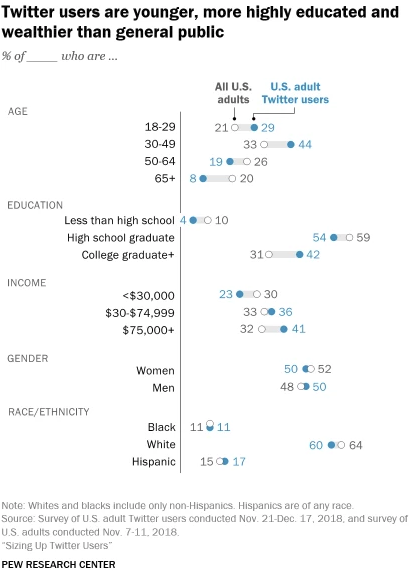 Politics aside, however, the views of “Twitter users are not dramatically different from those expressed by all US adults,” the researchers wrote.

Twitter represents just a thin slice of American demographics. The country is nearly split between people ages 18 to 49 and those 50 and older. But 73 percent of US tweeters are under 50.

Researchers based their findings on a 2018 survey of 2,791 ­users who agreed to share their Twitter handles with them.
Posted 1:27:00 AM